You are here: Home / Announcements / 5 alternative pallet materials you might not have heard about

Almost all companies are looking for ways to reduce their environmental impact and to become more efficient in the process. What if you could turn your harvest residuals or production scrap into your own pallets, thus eliminating the need to consume other resources needed to make pallets and have them delivered to you? This post looks at some surprising alternative pallet materials you might not have heard about.

With continued interest in the circular economy, there is growing interest. One of the ways to bridge sustainability and efficiency for pallet usage, according to Dr. Mark, president of White & Company, is to explore the opportunity for pallets made from various natural constituents that are recyclable and biodegradable. Increasingly, entrepreneurs and researchers are looking to agricultural crops and residuals as potential pallet stock.

To take a step back, wood pallets have long dominated pallet usage, and for good reason. They are relatively inexpensive and strong, providing a viable solution for many supply chains. Plastic pallets are highly valued in several applications (and growing at a faster rate than wood), as are niche options such as presswood, paper and metal.  Nevertheless, there always seems to be a new pallet guaranteed to raise eyebrows. Back in 2012, TerraCycle made headlines by announcing it was using recycled cigarette butts to make pallets. Another company makes pallets from recycled carpeting. Chances are, you haven’t seen any of those innovative pallets carrying merchandise in your supply chain. The quest continues, however, and agricultural fibers are garnering an increasing amount of attention.

“Fibers from banana trees and hemp, for example, are from sources that grow quickly and offer higher yields than trees,” Dr. White told Logistics Management Magazine in 2018. “…once banana trees stop producing they are otherwise useless, and hemp can be rotated every six months,” White explained. “Companies are molding these alternative fibers with or without adhesives into pallet form then testing to essentially try to improve on Mother Nature.”

As Dr. White noted, banana stems can be produced into pallets. Yellow Pallet is a Netherlands-based company that creates production systems designed to press or extrude banana waste into materials that can be assembled into pallets. The company recently reported that its banana fiber pallet blocks have now meet EPAL (European Pallet Association) technical standards. Given that 21 million pallets of bananas are shipped annually, there is a ready potential market for those pallets. The company is currently installing a production facility in Costa Rica. Note the video from Yellow Pallet.

According to CocoPallet International, a Netherlands-based producer of pallets made from coconut waste, 70 billion coconuts are produced annually, while less than 15 percent of the husk material is utilized. Present applications for husks include flooring and brushes. Around 85 percent of waste material remains, however. As such, this residual presents the opportunity for coconut-based pallets. The material is molded, using a natural binder to help form the pallets.

Founded by Dutch entrepreneur Michiel Vos, the initiative is based on technology developed by scientists at the University of Wageningen, the Netherlands. Vos recently appeared on a supply chain podcast to tell the story of Coco Pallet.  Vos was recently interviewed on the Let’s Talk Supply Chain podcast. 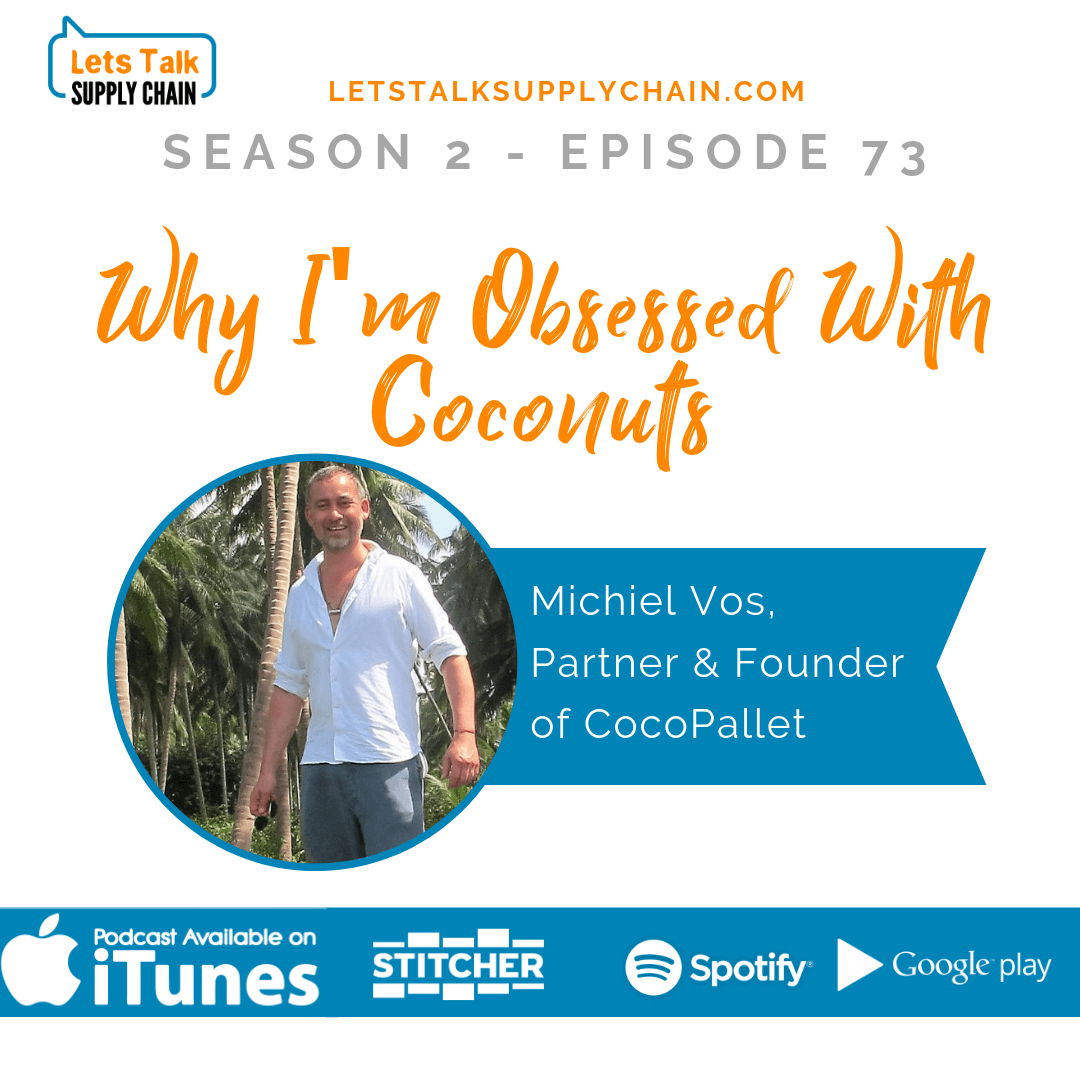 Bioestibas is a pressure molded pallet made from floricultural waste (hydrangea stems). The company is based in Mendellin, Columbia. The company consumes 250 tons of hydrangea waste monthly in its pallet production process.

Meanwhile, research in California has looked at using at the potential for torrefied (thermally treated) almond shells as a filler in various applications–including pallets. California grows 80 percent of the world’s almonds, generating more than one billion pounds of shells annually, so outlets are needed. Researchers from USDA have discovered that when used as a filler, the torrefied almond shells do a better job of making plastics stiffer than most other traditional materials. They are being tested with plastic trays and pallets, along with other products. The next step for the group is to determine if the torrefied fillers work as well on industrial scale extruding machines as it does on USDA’s smaller pilot-scale extruder.

According to Biofiba, an Australian entrepreneurial company behind the development of hemp-based pallet material, “Biofiba® is a patented, and tested extruded biodegradable simulated timber – used as a replacement for plastics, polystyrene, cardboard and as an alternative to timber.” As a point of differentiation from the other pallets in this list, while Biofiba is made from hemp, it is harvested for that purpose rather than being agricultural waste. Biofiba material is extruded into a profile (lumber) and then cut to length and fastened like a wood pallet. The lumber is made from industrial hemp. With changes to Australian law allowing industrial hemp usage, Biofiba  announced in 2018 that it had intentions of opening an Australian plant in 2019. It opened its first plant in China in 2017. As North American restrictions on industrial hemp production have ameliorated over time, a few companies are now developing hemp pallets in the U.S. and Canada.

Whether any of these innovative products gain a permanent toehold in the market as pallet materials remains to be seen. There will be many questions in terms of price, performance and customer acceptance. But the possibility of readily available pallet material and production at the farm gate seems like an idea well worth exploring.