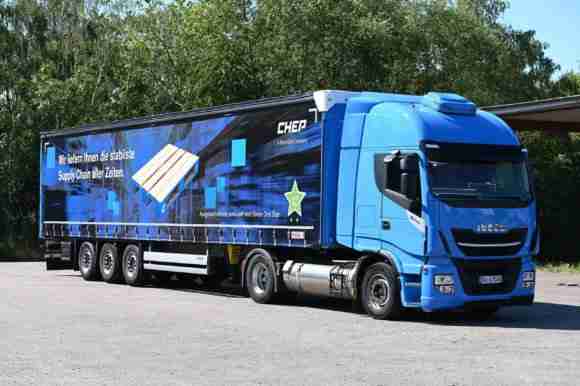 Cologne, June 3, 2020 – Wille Logistik works with 30 vehicles for CHEP every day. The owner-managed family company has been supplying food retailers and FMCG customers in the Rhine-Ruhr metropolitan region on behalf of CHEP since 1996. In addition to the 24-year partnership, CHEP and Logistik Wille combine the same values ​​in terms of sustainability: in 2018, the freight forwarder put the first truck powered by liquefied natural gas into operation and has been continuously expanding its fleet with environmentally friendly LNG (liquefied natural gas) vehicles since then.

Sustainability is becoming increasingly important in transport logistics. According to the freight transport and logistics action plan of the Federal Ministry of Transport and Digital Infrastructure (BMVI), alternative drive technologies play a key role in further CO2 reduction in the transport sector. Liquid natural gas is thus increasingly becoming an alternative to diesel in heavy road freight transport. In practice, gas trucks not only prove to be powerful but are also characterized by lower fuel costs and lower pollutant and greenhouse gas emissions than their diesel counterparts. This experience is also confirmed by Wille Logistik, one of the largest service providers for CHEP within Germany.

In 2018, the first Iveco Stralis NP460 gas truck started its journey in the forwarding agency. With the purchase, they looked for an environmentally friendly solution to reduce their ecological footprint. According to the manufacturer, the Iveco Stralis NP460 emits 15% less CO2 than diesel. It produces 85% fewer nitrogen oxides than the Euro VI emissions standard and almost no particulate matter. With an average of 1,500 km, according to Logistik Wille, its range is somewhat less than 2,500 km with diesel vans. The bottom line, however, is that the operation is cheaper. In addition, there is a reduced noise level and the resulting increased driving comfort.

The fleet currently comprises a total of 12 Iveco Stralis NP460s. The investment in new vehicles pays off in several ways: “In our experience, it is easier to find qualified personnel with the new trucks. Due to the corona crisis, there are currently plenty of drivers on the market. Shortage of drivers will certainly be an issue again as soon as the situation has relaxed, ”says Daniel Wille, Managing Director of Wille Logistik GmbH.

To make a contribution to climate protection, all existing diesel trucks are to be successively replaced by LNG vehicles after their average lifespan of five to six years. CHEP very much welcomes this decision.

A partnership that lasts

In addition to the commitment to sustainability, other values ​​combine CHEP and Wille Logistik. “We attach great importance to working in partnership with our service providers. In 1996, with Wille Logistik, we chose the right partner for western Germany: the unbureaucratic cooperation, the high level of flexibility and reliability have proven invaluable, especially in challenging times. The use of LNG vehicles corresponds entirely to CHEP’s corporate st