You are here: Home / Featured Articles / Will the New War on Disposable Plastic Be an Opportunity for Reusables?

This article was originally published in January 2018. The urgency for fresh solutions to the disposable plastic problems continues to underscore the potential for the increased usage of reusable packaging.

The hounds are in pursuit. The Guardian is reporting that two hundred cross-party MPs in the UK “are calling on the heads of the major supermarkets to eliminate plastic products from their products by 2023” (Hundreds of MPs call on supermarkets to scrap plastic packaging):

They wrote after the Guardian revealed this week the major supermarkets in the UK create more than 800,000 tonnes of plastic packaging waste – well over half the household plastic waste – each year.

Six of the major supermarkets refused to reveal the amount of plastic packaging they put on to the market, saying the information was commercially sensitive. Analysis by Eunomia environmental consultants used figures provided by Aldi and the Co-op – the only chains to release public figures on their plastic tonnage – and the market share of each supermarket to estimate how much plastic packaging the chains produce each year. 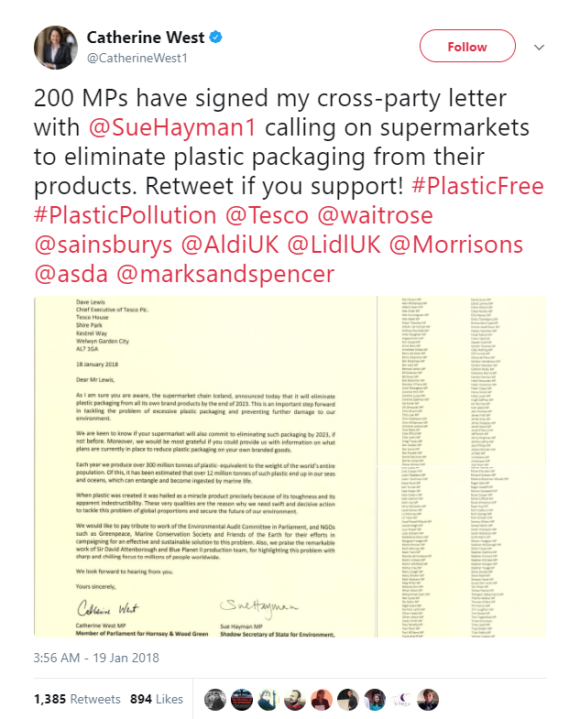 One of the other major UK retailers, Iceland, said it would stop plastic packaging on its own brand products by 2023.  According to the Guardian, UK supermarkets have a deal with that country’s compliance regulators to maintain confidentiality regarding their reporting of plastic waste generation.

In terms of sustainability, the issue is complicated. Plastic packaging helps dramatically eliminate food waste and carbon emissions associated with that loss. Atmospheric carbon leads to the problem of acidification, another significant problem for fresh and saltwater bodies. Meanwhile, the ocean is becoming choked with plastic.

Perhaps more sustainable solutions will emerge, however, given governmental and consumer pressure to restrict the use of plastic for the purpose of prolonging the shelf life of perishable food products. Innovations such as wood-based nanomaterials or other technologies might be able to fill the void. Time will tell.

The Plastic Backlash and Reusables

Meanwhile, plastic increasingly finds itself under the harsh scrutiny of the press, lawmakers, and the public. It gives one pause to think about how a backlash against plastic could impact reusable plastic packaging, even though a body of research supports it as being more sustainable in applications such as RPCs than other expendable packaging options.

Some reusable plastic packaging providers have already taken steps to differentiate their products and services from problematic plastic disposable packaging.

For example, IFCO notes in one blog that:

RPCs are a perfect example of the Circular Economy in action and how plastic packaging can contribute to society without contributing to ocean plastic. Durable IFCO RPCs are used dozens of times. They are loaded with fresh products and delivered to retailers, where they are emptied. Then, they are accumulated at the distribution center for return to IFCO, where they are washed and inspected before reissue to the next customer. When they are eventually damaged beyond economic repair, they are recycled to make new RPCs. Because RPCs are valuable containers that are diligently managed throughout their lifecycle, they stay within IFCO’s closed loop system.

To the extent that reusable containers are reused many times, the carbon impact of producing expendable packaging for each and every trip can be avoided, along with reducing other negative outcomes such as product loss thanks to the superior product protection and ventilation of reusable containers.

The Importance of Repeated Reuse

The fact that reusable packaging can be reused on multiple occasions is not in itself a compelling argument, however – an understanding well known by industry providers. The possibility of reuse is no more convincing than the argument that ocean plastic is recyclable. Recyclable plastic is still in the ocean, strangling turtles and being ingested by fish, as too many photos graphically display. The value of reusables, at risk of stating the obvious, is in their repeated reuse. Steps to ensure successful reuse and end of life recycling help differentiate reusable plastic pallets and containers from the supermarket plastic trash generation that is currently in the crosshairs of UK lawmakers. Successful asset management is crucial.


Plastic reusable packaging provides important contributions to sustainable, cost-effective supply chains. Pressure from the current plastic backlash should give providers and users pause to ensure that their plastic packaging is long lasting and well managed so that it stays in service and is not swept up in illicit back-alley grinding schemes or otherwise lost from useful service.

Through demonstrated successful reuse, the reusable packaging industry clearly distances itself from the current backlash. Given our current environmental concerns, reusable packaging is more important than ever. With plastic squarely in the glare of public scrutiny, we are afforded the opportunity to explain how reusable packaging is different than the disposable plastic currently dominating the headlines, and as such, promote its use in support of sustainability.