You are here: Home / Announcements / Are Pallets the Most Promising Greenfield Market for the Internet of Things?

Simply put, the Internet of Things (IoT) refers to connecting any device to the Internet and/or to each other. IoT includes everything from cell phones, refrigerators, coffee makers, wearable devices, or just about any device you can imagine. In business, it could be used such things as components of machines, corporate assets of any size and shape, including pallets and reusable containers. Analyst firms estimate there will be tens of billions of connected devices by 2020. 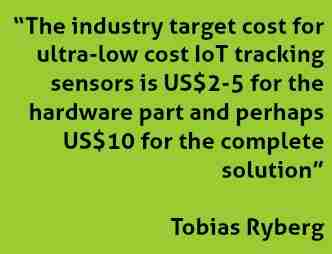 To date, the use of RFID and now other cellular technologies for tracking pallets have not gone mainstream, in large part due to cost. Such technologies are most prevalent in particular supply chains such as automotive, industrial and pharmaceutical where the cost of the solution is offset by benefits such as optimization and big data, or risk mitigation opportunities reaped by a dominant supply chain participant such as John Deere or Johnson Controls.

As for pallets, a new report from Swedish analyst company Berg Insight ranks connected pallets as the most promising greenfield IoT application enabled by LPWA (Low-power wide-area) cellular and non-cellular technologies. The new technologies are said to be cheaper than RFID, and unlike RFID, do not require nearby readers or interrogators to work.

Based on industry estimates, Berg Insight reported that the global base of pallets used for transportation is around 10 billion units, making them a huge potential market for IoT. “With an average sales price of US$ 10 per unit for regular pallets, the cost of adding connectivity can be justified by increasing efficiency in many logistics operations”, stated Tobias Ryberg, Senior Analyst and author of the report. “The ability to track pallets can also contribute to extending their lifespan which is currently around 2 years.”

The cost of sensors and monitoring services still could be viewed as high for many applications. Ryberg envisions that with scale, however, the cost of a sensor and monitoring solution could drop to $10 per pallet, which would make it of much greater interest to pool managers and supply chain executives looking high-value and reduce loss.

“A key part of the business case demonstrated in pilots is to increase the recovery rate of used pallets,” Ryberg said, Of course, he noted, additional benefits will be available for the organizations with the best capabilities to optimize their supply chain operations by using real-time information from pallets.

“The industry target cost for ultra-low cost IoT tracking sensors is US$2-5 for the hardware part and perhaps US$10 for the complete solution,” Ryberg explained. “This is achievable once volumes can be projected to grow from millions to hundreds of millions. Communication costs will be very low and probably included in the selling price of a pallet sensor designed for a few years’ life. Network revenues will at most be a few US dollars per year.”

Ryberg observed that the complexity of supply chains is the greatest barrier to adoption. “Initially, they will be requested for specific use cases by specific customers and deployed by companies that own large numbers of pallets,” he said.

“I’d say adoption will start with the most valuable pallets,” Ryberg said, as well as in verticals with high-value goods.  “There will probably also be regulation driven use cases, specific to various countries.”

Ryberg stated that there are players right now who could proceed with large-scale deployments in the very near future. In the pooling sector, for example, RM2 has actively promoted its intention to install IoT devices in its pallets, both in Europe as well as in the U.S.