You are here: Home / Breakthroughs in Material Handling / What Happened to the “Cadillac” Pallets of 1961?

Simply summed up, pallet users are finding that the per-use cost of a pallet is far more important than the purchase price -something we’ve been saying in the pallet industry for years. The only difference today is that a man who wants to apply this principle to his pallet program has better pallets to work with. 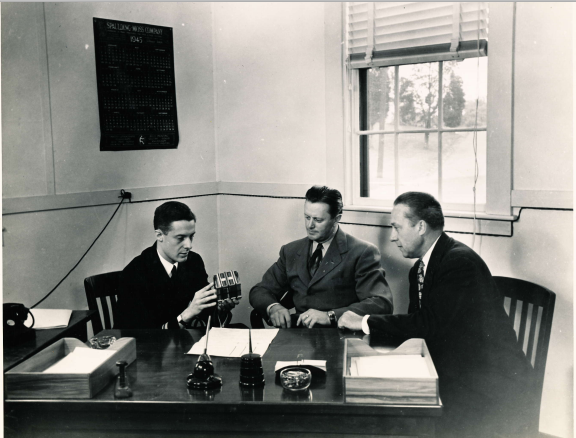 That’s Oscar F. Arthur (center) touching base with a naval client in 1945

I had to crack up just a little when I read the attached article. As pallet vendors still work to explain the benefits of a cost per use approach versus purchase price in the second decade of the 21st Century, it turns out that it was already old news way back in 1961! But I’m getting ahead of myself. The story starts with an email.

Kristy Arthur Gish, proud daughter of the late businessman and inventor Oscar F. Arthur, recently sent me another group of images from her father’s past, as she goes about the work of digitizing his material handling legacy, which she says is housed in two or three boxes.  Arthur was in the thick of things during World War 2 with respect to fabricating steel material handling equipment for the military, including landing mats as well as steel pallets. In fact, there is an old War era Palletizer cover that I use occasionally. It shows one of Oscar’s steel wire 8-way entry pallets being raised by a forklift, with the Hingham U.S. Naval Ordnance Material Handling Laboratory sign hanging in the background.  I will revist Arthur’s contributions in more detail in future installments. In this post, I wanted to focus on one of the gems I received, a reprint Arthur had ordered of the August 1961 issue of Modern, entitled “What’s Behind the Swing to ‘Cadillac-Type’ Pallets? (You can view a PDF file of the reprint at this link.) One of the pallets featured was his own extremely durable wood and steel model, the “Gilbraltar”, which is a wood pallet reinforced with steel.

According to Gordon C. Thomas, Modern’s associate editor of the time (later to become the managing editor), enlightened pallet users of the early 1960s were saving more money on pallets than ever before, in spite of paying more for pallets. The explanation for this shift in thinking was a recognition that extremely durable pallets could be reused dozens of times, and ultimately deliver a much more attractive cost per trip. This is emphasized by Bill Sardo, Vice President, National Wooden Pallet Mfrs. Assn (later NWPCA) who is interviewed by Thomas in the piece. “Remember,” Sardo stated, “when the per-use cost of an indestructible pallet is realized by the user, the cost of an expendable pallet suddenly seems high.”

Sardo presented eight new “beefed up” pallets that could deliver superior performance. One of them was the Pallet Guard, which featured steel end bumpers. According to Sardo, “This has worked out well for many users who have severe damage problems. An automotive manufacturer, whose standard pallets used for heavy castings had an average life of six months, with maintenance every 30 days, switched to this type of pallet four years ago and has yet to replace a pallet. A petroleum refiner, who rolls filled drums onto pallets, has had a similar experience.”

Later in the interview, Thomas asks Sardo about the popularity of pallet leasing:

Thomas: Now, since you mentioned leasing in connection with the Nailess pallet, how about it? Is it common?

Sardo: No. There is some interest in it, but the financing is a problem, probably because of the newness of it. I think that once industry gets in the habit of using the longer lived pallets, Ieasing will follow as a matter of course.

Given the bullish prognostications of 1961, one is left to wonder why such “beefed up” pallets did not win the day, and what happened to the “swing” toward them. Maybe someone will pour over Modern Materials Handling dispatches from the following decade and come up with a definitive answer.  For now, here’s just speculation as to why the “swing” did not succeed.

So why didn’t the Cadillac-type pallets of 1961 take hold? I welcome your insights!

Please read other articles in our Breakthroughs in Material Handling series. 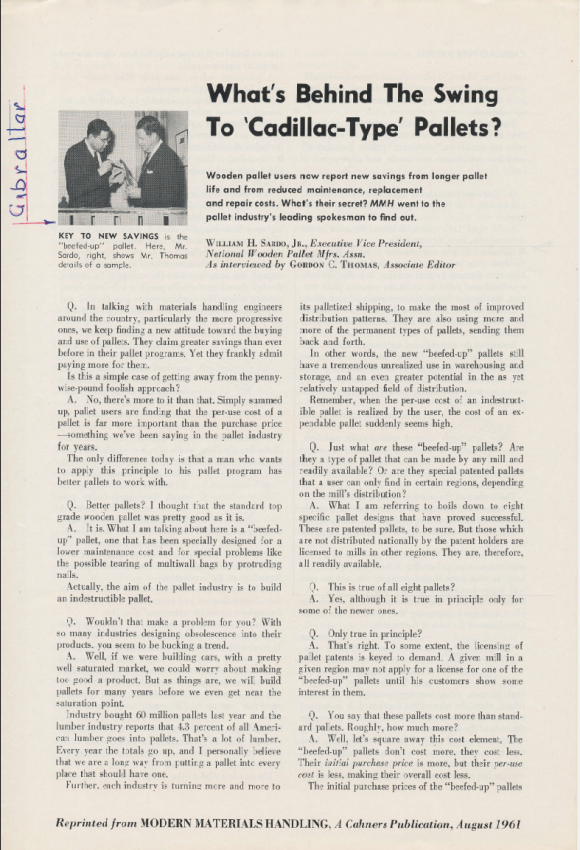