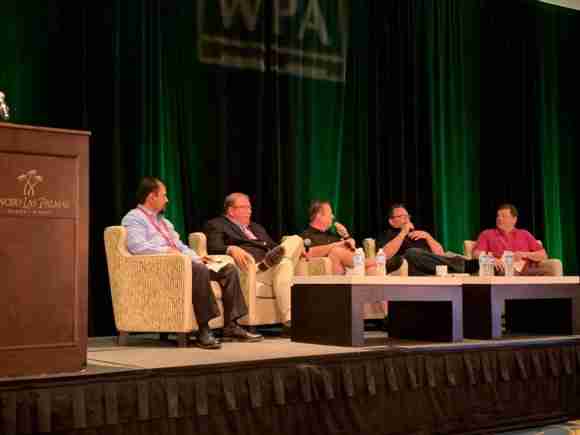 Attendees heard that one of the key points about automation is providing a better experience for employees rather than replacing them at the Automation Panel: Investments with Best Returns, which took place at the 2019 WPA Annual Meeting in Rancho Mirage, California. Panel participants included (from left to right, photo above) Jorge Erosa of San Fernando Valley Pallet, Rodney Wadel of R&R Pallet, Frank Shean of Valley Pallet, Ray Gutierrez of Commercial Lumber & Pallet Company, and Scott Geffros of CWPCA.

Gutierrez stated that his company’s greatest investment is the employees themselves. “They are the ones that can make or break your operation. We try to make sure they always operate safely, and that they have the knowledge and the abilities to be as efficient as they possibly can.”

He stressed that automation doesn’t reduce his company’s dependence on labor. “Generally, we are not replacing machinery, but adding machinery to increase production. And when you add machinery, you need to add more people to run it.

“That being said,” Gutierrez continued, “we try to invest in our employees to make sure they are happy, that they like to come to work, and that there is a good safe work environment. We feel that really helps our company.”

Frank Shean noted that the pallet industry workforce is comprised of a lot of skilled labor, and automation is one way to help them be more comfortable and productive. “These people are very important to us and our industry,” he said. “I respect our workforce more than I ever have, and we need to take better care of them. Hold them high in esteem in your company, because without that workforce we would not be able to run our businesses.”

Scott Geffros observed that no two pallet operations are the same, but one common opportunity he hears about from CWPCA members is automating material handling. Whether a sortation system, conveyors or other equipment, they seem to have an immediate impact on labor reduction. One CWPCA member installed an automated sorting line that reduced labor requirements by 3 material handlers and 1.5 forklift operators.

Commercial Lumber & Pallet enjoyed a payback of just over a year when it invested in a new heat treatment chamber to replace an older unit lost in a fire. While the regulatory approval process was a daunting 15-month stretch, the quick payback was made possible because of the new chamber’s larger capacity, and a 3-hour cycle time versus an 8-hour cycle in the old unit.

Automated waste removal was a highly successful investment for Valley Pallet. “Years ago, we would put the dunnage in a basket, and a forklift would take that basket away to have the waste ground or dealt with,” said Shean. “We decided to get away from that, so we installed waste conveying at all of our pallet teardown and repair stations so that all the dunnage is carried over to the grinder and dropped automatically into it. And that saved us a tremendous amount of forklift driver time. It also eliminated traffic, so it was a safety improvement as well. Payback was achieved in less than a year.

A more recent investment in automation for Valley Pallet has been automated board stackers. The investment allowed Valley Pallet to repurpose labor from stacking to other duties. It achieved payback in less than 6 months.

Rodney Wadel and Jorge Eroza were both involved in automation projects to improve their pallet recycling operations. Wadel identified stackers and destackers as “low hanging fruit” for investment. “They probably achieved payback faster than anything else we’ve ever done in the pallet industry,” he said. “Sorting all of the pallets before they get to the repair station offered a tremendous payback really fast.”

San Fernando Valley Pallet enjoyed a rapid payback from its investment in sorting automation. “We implemented a sorting system because the stacking was too labor-intensive,” Eroza said. The investment in the system was $400,000, but payback was achieved in a year. Fewer people were required to do the work while handling for forklifts became simpler. “All stacks at the end of the line are ready to go,” he explained.

While the panelists represented larger players in the industry, they were quick to point out that they themselves started out as small operations, and that there are positive steps that smaller pallet companies can also take to improve efficiency.

“We started out in the back of an Oldsmobile station wagon,” Shean said. “It was hammers and nails, fix them and sell them, and that’s really how we got started. So all of us have been through that process.” Shean said his suggestion is very simple. It involves looking at your operation and studying the flow.

“Look at how it comes in, and how it goes out,” he said. “And then look at trying to improve that flow, trying to put work stations in the right locations, trying to get a smooth flow from the ‘in’ to the ‘out’ without automation.”

After efforts to improve production, Valley Pallet turned its emphasis to plant organization. “For us, there was a real emphasis on organization, on housekeeping, on inventory storing and stacking,” Shean said. “All of those things are very, very important. When you are able to improve those things, the light will come on, things will be moving smoother.” He noted that a lot of pallet yards are constrained by space and that they end up manually stacking pallets too high.

For his part, Eroza noted that smaller companies can start automation incrementally, once their material flows are diagrammed and optimized. “We all started with nothing, doing everything by hand,” he said. He stressed that it is possible to grow into automation incrementally with lower cost investments such as conveyors and stackers.

And while he came from an automation background prior to getting involved in the pallet industry, he only made the decision to invest in automation four or five years ago because he came to realize he would always remain small unless he invested in automation.

If at First, You Don’t Succeed

A common theme among participants was to be open-minded about trying new things, and not everything you will try will necessarily work. One panel member shared a story about a $75,000 investment in a stacker that ultimately did not work in his operation because of space constraints.

“Don’t be afraid to try,” said Geffros. “A lot of great innovations going on, all around us. Experience is the best teacher, and out of failure often come the best results. For small operations, look at small improvements with big returns, but don’t be afraid to screw up. ”