You are here: Home / Announcements / Wegmans Pioneers RPCs as Alternative to Foam Coolers

Wegmans leverages RPCs to help it eliminate 1 million pounds of Styrofoam by the end of 2022. 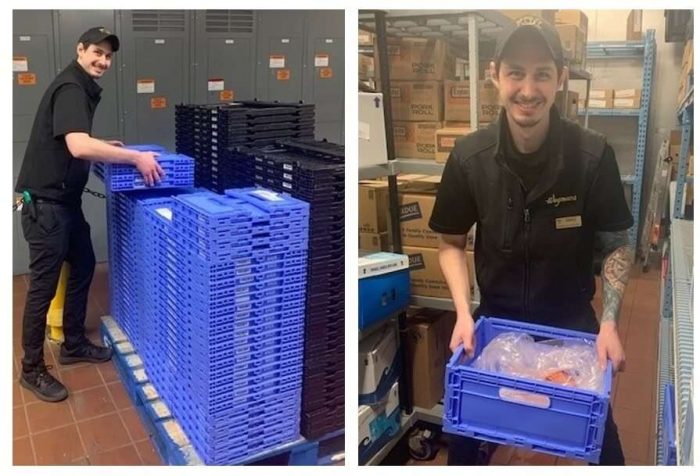 The number one job of a food package is to protect the food it holds inside all the way to your kitchen table. Ensuring those items first make it to the grocery store shelves in one piece and are safe to eat takes additional packaging. For shelf-stable items like cereal, rice, and pasta, a simple cardboard box does the trick. But when it comes to fresh items like produce, meat, and seafood, finding the best package for the job takes a little more work, particularly when there’s a focus on sustainability.

“Sustainable packaging has been a focus of ours for a number of years,” explains Jason Wadsworth, Wegmans category merchant for packaging, energy, and sustainability. “Our job is to make sure packaging is functional, performs as expected, and uses materials efficiently and responsibly. As often happens with sustainability initiatives, the changes we’re implementing and the progress we’re making aren’t always easy to see.”

A great example of this is the new reusable plastic containers or RPCs that Wegmans is using to get fresh seafood from our suppliers to its stores, eliminating the need for single-use Styrofoam coolers. The use of RPCs for transporting food instead of using single-use packaging isn’t new, but the application is. In fact, Wegmans is the first retailer to launch such a program for seafood, though we’ve been using reusable plastic totes to transport produce and meat for years.

“The seafood industry tends to lag behind others, and doesn’t adjust to change well,” shares Mark Fromm, Wegmans seafood category merchant, in explanation. “We have wanted an alternative to foam coolers for a while, and as our sustainability team continued to roll out our Zero-Waste program to more and more stores, we started hearing feedback from our store teams about the foam coolers, and we knew it was time to find a more sustainable option.”

Wegmans’ seafood and sustainability teams started exploring the RPCs used by the meat department, as they offer a number of benefits. RPCs perform equally as well as foam coolers in keeping products cold and secure during transportation. They are also collapsible and stackable, taking up less room on the return truck to the supplier for the next shipment, and the cost of the containers is equal to or less than the cost of foam coolers. But there was one hurdle to overcome – the size.

The containers, made by Tosca, were only available in one size, which was too big for most of the product the seafood team transports, but perfect for the 20-pound case packs of salmon. To test the viability of the containers for transporting seafood, the seafood team enlisted the help of our long-time salmon supplier, JD & Sons, based in Rochester, New York.

“We’ve partnered with JD & Sons since the 1980s, and they’ve always been fantastic to work with. They are forward thinking and always interested in trying new things,” says Mark. “They were already looking for a way to get out of Styrofoam, so when we approached them with this idea to use RPCs, they couldn’t wait to get started.”

The pilot launched in February 2020 and very quickly was a success. Armed with data that showed RPCs are a viable alternative to foam coolers for transporting seafood, Mark reached out to Tosca to see about getting a smaller crate that would be suitable for the rest of the seafood team’s needs.

“From the very beginning, this idea of using reusable containers that have a lifespan of at least eight to 10 years and can then be recycled, in place of single-use foam coolers, was about doing what’s right for the environment, and getting the seafood industry as a whole on board,” says Mark. “When I reached out to Jeremy at Tosca about a smaller tote, he immediately saw the potential in what we were trying to do and set to work on designing a smaller tote.”

While work on a smaller tote was underway, our seafood team focused on introducing the existing Tosca crates to additional suppliers, like JJ McDonnell in Maryland, and bringing them on board. By the end of 2020, Wegmans and its participating suppliers eliminated the use of 216,700 foam coolers.

Once the development of the smaller crate was completed in 2021, Tosca sent samples to JD & Sons for testing in a limited, four-store pilot. As expected, the pilot was a success, and Wegmans has expanded the program to additional suppliers, who are using the new half-sized totes to transport a variety of fresh seafood items. Currently, five Wegmans suppliers have made the switch to RPCs, a change that will result in more than 1 million pounds of Styrofoam being eliminated from its supply chain by the end of this year.

“All our suppliers have been incredibly receptive to this idea, particularly since we have data to show the crates work. They are just as effective as their foam counterparts, and just as affordable” says Mark. “Tosca, JD & Sons, and JJ McDonnell, have all been incredible partners with us over the last two years to make this program a success. Tosca is now seeing a higher demand for the totes than the stock they have available. They’re working hard to build up inventory as the demand around the industry continues to grow. All in all, it’s a great problem to have. It’s great to see the industry moving in this direction and the positive impact it’s having on our environment.”

This story was published by Wegmans.