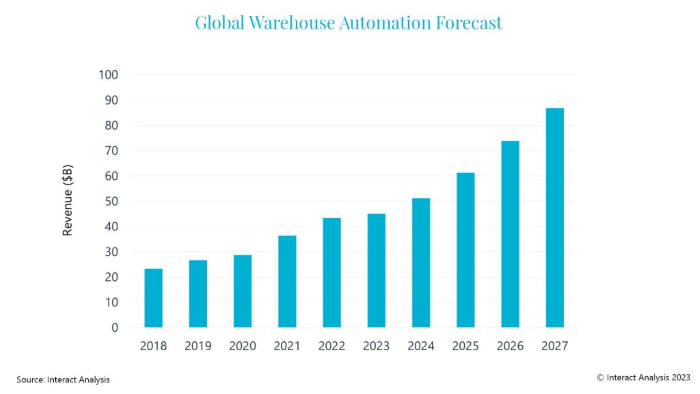 Widely recognized as an important driver for reusable packaging growth, the global warehouse automation market was valued at $36 billion in 2021 and is forecast to grow to $77 billion by 2027. The industry has undergone a series of shocks this year that resulted in a slight decline in order intake in 2022. However, in the mid-to-long term, a new report predicts a return to healthy growth with an estimated CAGR of 13% between 2021 and 2027.

According to the latest research from Interact Analysis, there are four major factors having an impact on the market in the short term – the Ukraine-Russia war, lower investment by Amazon, changes to commodity prices, and rising inflation rates.

The war in Ukraine is having a negative impact on the whole of Europe, but in particular durable manufacturing in Eastern Europe. Investments in warehouse automation from manufacturing facilities in Eastern Europe have seen an uptick in recent years, especially with the trend toward near-shoring. However, researchers heard during their investigation that many companies have reportedly postponed their investments due to the ongoing conflict.

Europe invested heavily in automation in the wake of the COVID-19 pandemic and subsequent labor shortages, but since the war in Ukraine, this trend has started to slow in some parts of the continent. However, in the long term, out to 2027, growth is still expected to remain high for the warehouse automation market: at a CAGR of 10-12%. The conflict has also indirectly influenced rising interest rates and inflation. As consumer spending slows, retailers will likely tighten their purse strings and potentially postpone large-scale automation projects until a more stable economic environment has been reached.

Amazon is also having a negative impact on the market. Earlier this year, Amazon announced a slowdown in its fulfillment center expansion, which is having a direct impact on the company’s warehouse automation spending activity. In 2022, it is estimated that its spending on such projects will reduce by 30%, followed by a fall of 20% in 2023. Given how much of the market is driven by Amazon, a slowdown in investments will reduce overall revenue growth. Furthermore, companies that have typically been exposed to Amazon will now be looking elsewhere for business which will likely increase competition and potentially erode margins.

For example, Amazon announced it would be slowing down its fulfillment expansion after posting a loss in Q1 2022. This will have a significant impact on its investments in warehouse automation which we expect will be cut by 30% in 2022 with a further 15% reduction in 2023. Ocado also announced it would be reducing its expansion plans as it ponders how it will fully utilize its new facilities in Bicester and Luton in England.

Since its peak of 16.4%, US e-commerce penetration dropped slightly in 2021. This was largely due to a shift back to brick-and-mortar retail which is going through somewhat of a renaissance, wrote Rowan Stott of Interact Analysis in a related blog.  “This caught many retailers off-guard as they expected the pandemic would permanently change buying habits. In response to the slowdown in e-commerce sales, many e-commerce retailers announced a pullback in their fulfillment network expansions.”

“Mobile robots have become the most significant trend in the automation market in recent years,” noted Rueben Scriven, Research Manager at Interact Analysis. “By 2027, they will account for 30% of total warehouse automation revenues, equating to around $14 billion.

“Although mobile robots are thought to be displacing fixed automation alternatives, this isn’t necessarily the case. They are often opening up new market opportunities, which would otherwise have remained manual. This type of technology is best suited to situations that require flexibility and scalability, whereas fixed automation is more appropriate in scenarios where increased throughput is the main goal.”

About the Warehouse Automation Report

The 4th edition of our Warehouse Automation report guarantees to provide the most comprehensive and detailed analysis of the market. To produce the report, we’ve spent 8 months conducting more than 100 in-depth research interviews and analyzed more than 120 companies, looking specifically at their past, present, and future investments in warehouse automation.

With over 200 years of combined experience, Interact Analysis is the market intelligence authority for global supply chain automation. The company’s research covers the entire automation value chain – from the technology used to automate factory production, through inventory storage and distribution channels, to the transportation of the finished goods.  To learn more, visit www.InteractAnalysis.com.