You are here: Home / Uncategorized / Vanderlande Rings Up Orders Worth €1.4 Billion 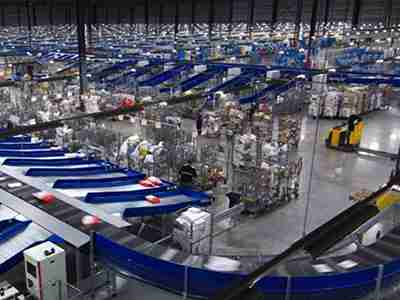 Vanderlande has confirmed that it has secured a record order intake of €1.4 billion in 2015 for its integrated solutions in the baggage handling, warehouse automation, and parcel and postal markets, including the company’s array of life-cycle services. This represents an increase of up to €400 million compared to the previous year’s order intake of €1 billion.

The baggage handling market is developing favourably on a global basis with Vanderlande clearly positioned as the market leader. This may be evidenced by a significant landmark in the company’s history with the confirmation that it will supply the entire baggage handling system for Istanbul’s new international airport, with a capacity that will see it become one of the world’s largest airports.

The company has also been selected as the supplier for the Terminal 1 Redevelopment project at Singapore Changi Airport, which is its largest-ever baggage handling contract in the Asian market. Further orders for Vanderlande’s innovative systems and intelligent software have been secured at Kingsford Smith International Airport in Sydney, Kiev Boryspil Airport and Houston George Bush Intercontinental Airport.

The rapidly expanding warehouse automation market has also been successful for Vanderlande with a significant level of new business secured in the food retail sector. Vanderlande’s value-added systems enable fully automated case picking (ACP) across a wide range of products. This is facilitated by the company’s load forming logic (LFL) software, which automatically builds pallets or roll cages in the same sequence of product groups as a store’s layout.

These orders have been attracted from such leading chains as Albert Heijn (The Netherlands), E.Leclerc (France), Consum (Spain), Cencosud (Chile), and some large Asia-Pacific food retailers. In addition, Zalando and Würth are extending their existing automated warehouse system.

In the fast-growing parcel and postal market, Vanderlande has reconfirmed its leading position and has further developed its business with the leading international parcel delivery companies. Among the new orders secured by the company in this highly competitive sector are FedEx, SF Express (China) and DHL Leipzig (part of Deutsche Post DHL).

EDEKA Südwest Fleisch (Germany) has also extended its site-based service contract for an additional period and a further agreement has been secured with Asda (UK). After completion of its state-of-the-art new automated distribution centre in The Netherlands, Albert Heijn will engage Vanderlande’s experienced life-cycle services team.

“Vanderlande is continuing to add value to our customers’ businesses, which is helping us to expand within our current markets,” says Govert Hamers, Vanderlande’s CEO. “We are currently carrying out as many as 260 projects in no fewer than 105 countries worldwide, and internationalisation is increasingly important for our company’s ongoing success. As a leading global partner, our international network is an invaluable asset as we ensure that we are in close proximity to our customers.”