You are here: Home / Announcements / The Internet of Things and Reusables: If Pallets Could Speak, What Would They Tell Us?

The Internet of Things (IoT) and reusable packaging including pallets have the potential to form a beautiful relationship, but IoT is complicated.

Asset loss, noted Cindy Goodman, IoT Business Development Manager, AT&T Mobility Services, is the biggest barrier to the more aggressive adoption of reusable packaging. To the extent that IoT can help curb reusable asset loss, then it should help tip the ROI calculation for reusable packaging. Goodman recently spoke on the topic of IoT and reusables at Promat 2017, along with Dave Kalan from RM2, a composite pallet producer, and pooling provider.

To take a step back, IoT was described as follows in a 2014 article in Forbes:

Simply put, this is the concept of basically connecting any device with an on and off switch to the Internet (and/or to each other). This includes everything from cell phones, coffee makers, washing machines, headphones, lamps, wearable devices and almost anything else you can think of. This also applies to components of machines, for example, a jet engine of an airplane or the drill of an oil rig. As I mentioned, if it has an on and off switch then chances are it can be a part of the IoT. The analyst firm Gartner says that by 2020 there will be over 26 billion connected devices… That’s a lot of connections (some even estimate this number to be much higher, over 100 billion). The IoT is a giant network of connected “things” (which also includes people). The relationship will be between people-people, people-things, and things-things.

So What If Pallets Could Speak?

Truth be told, the RM2 spin on IoT is kind of funny, but not in a way to negate its potential, which is considerable. RM2 calls its offering ELIoT (Electronic Link to the Internet of Things.) As Kalan pointed out in his presentation, in the movie ET, Elliot, one of the main characters, helped ET phone home. The goal of ELIot is to assist pallets in calling home with relevant information, and as a result, contribute to the optimization of operations and the reduction of asset loss. The quality of the images below isn’t the best, but the hypothetical reports from pallets in the field are relevant and worthy of a chuckle: 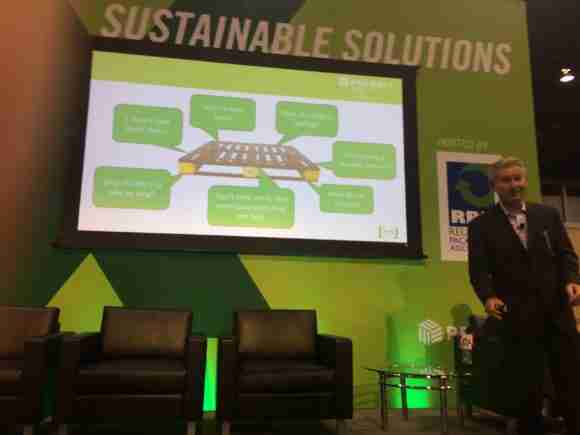 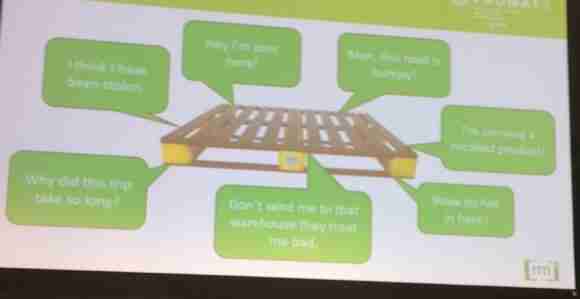 In the case of RM2, the composite pallet manufacturer and pooling provider plans to build the cost of having IoT into its offering, so pallet users can enjoy the benefits of IoT without the current sticker shock of purchasing the hardware needed to make the system work. In her presentation, Goodman provided an example, for illustrative purposes, of an application involving reusable tanks and having a monthly charge of $17.50 per month.

If the cost of tracking is that high, what are we talking about regarding IoT as an asset retention tool? A price of $17.50 per month is going to be a deal crusher for of a lot of reusable packaging applications, although a broader perspective on the value of visibility might well make an attractive return. In such a case, we are talking a higher level sales opportunity where asset retention is just a single bullet in an extensive list of value creation possibilities. In the example Goodman provided of the tanks, there was a saving of $300,000 annually on a 1,000 tank inventory. I didn’t quite catch how much of that was attributed to asset loss reduction. And to be fair to Goodman, when I asked her about pricing at the end of the presentation, she said that the pricing is hard to generalize because it depends on various attributes of an application. She talked about numbers like $80 or $100, which in my mind, aren’t going to create much of a buzz in cost justification based on asset management.

But wait another second.

Berg Insight has just announced a new report where they identify the world’s 10 billion pallets as the most compelling greenfield market for IoT. According to Tobias Ryberg of Berg Insight, pricing could become a lot more attractive with volume:

“The industry target cost for ultra-low cost IoT tracking sensors is US$2-5 for the hardware part and perhaps US$10 for the complete solution,” Ryberg explained. “This is achievable once volumes can be projected to grow from millions to hundreds of millions. Communication costs will be very low and probably included in the selling price of a pallet sensor designed for a few years’ life. Network revenues will at most be a few US dollars per year.”

If pallets genuinely could speak to us, what would they say? Given that they often encompass mature technology, they would probably give us a few established pearls of wisdom, such as to go after low hanging fruit. You know, things like high value or regulated goods, or supply chains with dominant players that have significant control over their networks, or if the price is right, for reusable packaging or pallet applications that can generate a payback based on better asset management.  But if you are going after the asset retention angle, it has to make sense.

Daylight at the end of the RFID hype cycle tunnel