Measurable improvements at a glance 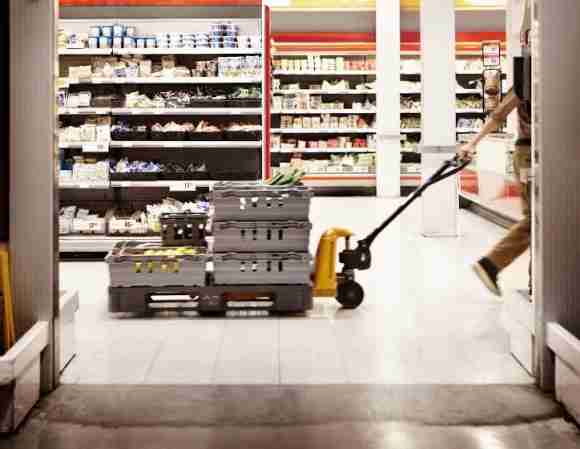 Manufacturers and wholesaler/retailers throughout Sweden are moving their goods out to 3,500 retail stores on reusable transport packaging, saving time and cost in material handling, reducing product damage, making the supply chain more efficient, and reducing carbon emissions. Each year, around 7 million plastic pallets transport 125 million reusable crates of goods from producers to everyday commodity stores in Sweden, making it the first country in the world to standardize reusable packaging for an entire industry.

Almost every perishable product for every grocery chain in Sweden is delivered in one of six standardized reusable crates on a reusable plastic pallet. The supply chain includes the majority of Swedish food manufacturers and about 200 additional food manufacturers throughout Europe that export their goods to the Swedish trade. Since the program’s inception in 2001, nearly 1 billion crates have been delivered, replacing the same number of single use packaging. Svenska Retursystem created and operates the pooling system.

“By offering the whole industry the same terms and cost of packaging, the program has neutralized packaging as a competitive factor and freed up the food producers to focus more on their core business,” explained Conny Swahn, Sales and Marketing Manager at Svenska Retursystem.

“We see great benefits in using returnable crates,” said Petra Albushus, Logistic Director at ICA, the largest retailer in Sweden. “Not only do they simplify and streamline our supply chain all the way from the producer to the stores, they also reduce our environmental impact. Furthermore, waste is reduced as many products are better protected in the crates compared to disposable packaging.’’

The project was launched in 2001 by the Grocery Manufacturers of Sweden (DLF, Dagligvaruleverantörers Förbund), a non-profit organization for companies that produce and sell goods to the grocery retail and foodservice markets in Sweden; and the trade association for grocery stores  (SvDH – Svensk Dagligvaruhandel). The objective was to find resource-efficient methods for transporting, storing, and displaying goods. At the time, the producers of fresh produce, meat, poultry, cheese, and dairy mainly used single-use packaging of various quality and sizes. This model caused several problems:

“There were inefficiencies and waste in the distribution chain and the supply chain,” said Swahn. “We saw great opportunities and potential savings if the industry could standardize on reusable packaging.”

“The use of reusables in the supply chain is increasing rapidly in Europe. However, there was not a common standard and every business area or manufacturer ran a different system,” explained Swahn.

The effort received startup funding from LIFE, an EU environmental fund. All major wholesalers and manufacturers were involved in the development of technology and methodology. Today Svenska Retursystem is a company equally owned by DLF and SDH. It has four washing facilities located across Sweden and employs 135 people.

“We had very determined owners, demanders, and stakeholders who worked together to make this initiative successful,” said Swahn. “Once we reached a significant market share, the implementation pace accelerated and the cost savings increased significantly.”