You are here: Home / Featured Articles / Study Recommends the Elimination of Solid Wood Packaging and Pallets for Global Trade 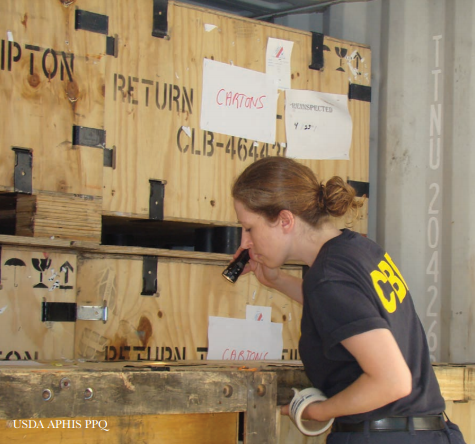 A study published in the journal, Ecological Applications, says that the U.S. must step up its efforts to prevent the importation and spread of forest pests, and the elimination of solid wood packaging and pallets constitute their first recommendation towards improving the current situation. To read a summary based on the research, click here.

Dr. Gary Lovett, a forest ecologist at the Cary Institute of Ecosystem Studies and the paper’s lead author, explains, “Imported forest pests are the most pressing and underappreciated forest health issue in the U.S. today. We need to act now to strengthen prevention if we are going to protect billions of valuable trees in communities and forests all across the U.S.”

According to the paper, more than 90 percent of wood boring insects that have recently invaded the U.S. entered in wood packaging. The paper proposes five basic steps towards improving forest health, which it refers to as Tree-SMART Trade actions.

Its top recommendation is a switch to non-solid-wood packaging which could reduce pests and result in the major economic benefits.

Historically, the report noted, 70 percent of forest pests arrived in the U.S. on imported plants. Ending or substantially limiting imports of live trees and shrubs that share a genus or species with plants native to the U.S. is another high-impact option identified by the researchers.

A fifth recommendation is to tighten trade enforcement guidelines.

Regarding discontinuing the use of solid wood packaging, the study recommends a variety of actions, including trade incentives or other measures to encourage businesses to switch, as well as increasing import fees for the use of wood materials to offset the true cost of tree loss and pest mitigation efforts. Ultimately, it suggests eliminating solid wood packaging through the use of procedures established in international trade agreements.

Response from forest industry thought leaders has been measured.

“Like most issues with hardwood forestry and the hardwood industry,” George Barrett observed in Hardwood Review, “it is the industry that has the largest vested interest in keeping the forests healthy and productive. Effective solutions like heat-treating and fumigation are already in place. Perhaps these efforts could be enhanced or better regulated, but banning solid wood altogether would do more damage to industries and economies than good to the forests.”

In recommending a cautious approach to any policy change, Barrett recalled how past policy aimed at protecting the Spotted Owl in 1994 through logging restrictions had been well-intentioned, but with disastrous results. Forest closures resulted in devastating effects on jobs, business, and the economy without helping the endangered species. He noted that the primary culprit turned out turned out not to be habitat loss or logging, but rather a competing species, the Eastern Barred Owl.

Patrick Atagi, NWPCA’s vice president of advocacy and external affairs was interviewed in Industrial Reporting’s Recycling Record, observed that a ban on solid wood packaging and pallets would have severe impacts on global supply chains in a way that would put workers at risk. He noted that a switch to plastic pallet usage would increase the use of fossil fuel.

Considering the adverse impacts of other options is a major component of any policy debate. While the research paper suggests that an additional import fee should be created to cover the external costs of inspection and pest mitigation related to solid wood packaging, there are externalities generated by any packaging choice. As such, it is unfair to consider just the external costs posed by only one of the options, in the absence of more fully exploring the others.

In the same editorial, Brindley agreed that banning solid wood packaging would pose huge problems for the global supply chain, and suggested that in some countries, a ban simply would not be feasible. “Better enforcement of existing regulations is the answer,” Brindley concluded. “Nobody cares more about our forests than our industry, but this proposed solution would be worse than the problem.”

It seems clear that in spite of the success of the ISPM-15 program to date in controlling the international movement of pests, there is still need of work to be done to improve it, as underscored by this research. While there is no indication of such a ban being considered by policy makers, the possibility of a more rigorous and costly ISPM-15 program in the near future as well as concerns about the effectiveness of the existing program will likely lead at least some degree of the market to re-evaluate alternative materials as an option.