Smurfit Kappa St. Peterburg was awarded in the Added Value category, at the Coca-Cola Hellenic Supplier Awards, held in Moscow earlier this month.

Smurfit Kappa received the award for its consistent service as a supplier. Judges at the ceremony also recognised the new non-standard box constructions developed for Coca-Cola by Smurfit Kappa as extremely innovative. 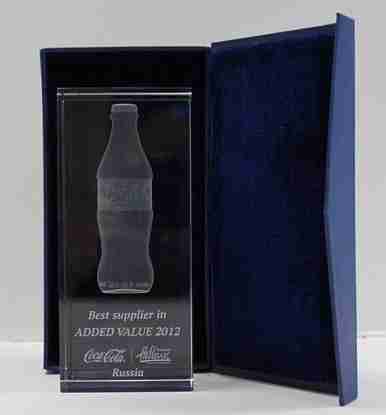 Established five years ago, the Coca-Cola Hellenic Supplier of the Year Award Ceremony is based on an overall assessment of its suppliers. Awards are granted using Key Performance Indicators in a number of areas, with an emphasis on strong relationships between Hellenic and the companies it works with. The Company has said that it recognises suppliers such as Smurfit Kappa, whose principles and ethics meet world standards and who strive to offer Sustainable solutions.

According to Yuri Sharabakin, Director of Supply Chain Management at Coca-Cola Hellenic Russia, “Experienced and reliable suppliers are one of the foundations of a successful business.”

Those in attendance at the 2012 event included Stefanos Vafeidis, General Manager of Coca-Cola Hellenic Russia.

Smurfit Kappa is one of the leading producers of paper-based packaging in the world, with around 41,000 employees in approximately 350 production sites across 32 countries and with a sales revenue of €7.3 bn in 2012. It operates in 21 European countries selling products including corrugated, containerboard, bag-in-box, solidboard and solidboard packaging as well as having a growing base in Eastern Europe in many of these product areas. It is the only large scale pan regional player in the Americas, operating in 11 countries in total in North, Central and South America.