You are here: Home / Uncategorized / Roundup: Wal-Mart Endorses Wood Grain RPCs from IFCO and Polymer Logistics, The Battle for Foam in New York 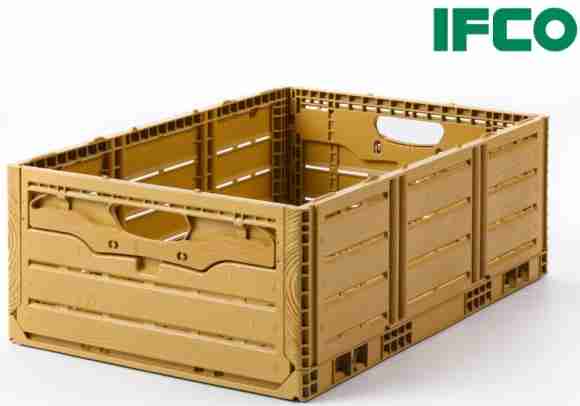 Tom Karst reported in the Packer last week that Wal-Mart is supporting the move to wood look RPCs, which are viewed positively by customers. Dorn Wenninger, vice president of produce for Wal-Mart, spoke in support of the transition at both the IFCO Systems and Polymer Logistics booths. Both companies will be providing the wood look crates to the retail giant.  IFCO Systems recently announced its new RPC service for Wal-Mart.

Wenninger expects the transition from black RPCs to the new crates to be completed during 2016. The wood look RPCs have been successfully tested in Wal-Mart stores for 9 months.  Three supercenters in Arkansas trialed Polymer Logistics wood grain RPCs last year. That successful test resulted in Polymer Logistics inking a supply deal with Wal-Mart in March 2015.

By 2016, Polymer Logistics will have five wash facilities in the United States by 2016, with new operations in Illinois and Georgia in addition to other existing wash locations in Riverside and Salinas California, as well as San Antonio, Texas.

Feiner believes the wood grain RPC will become the industry standard and will supplant the industrial black design.

New York City may be just one of over 100 cities across the U.S. with expanded polystyrene foam bans for fast food packaging, but it is here that the landmark battle for foam’s future in this application seems to be unfolding.

While the ban was launched in July, a petition by restaurants and businesses argued that packaging alternatives were too expensive and that the foam could be profitably recycled. This effort was bolstered by a lawsuit against the city by the Restaurant Action Alliance and Dart Container, an EPS manufacturer. In September, a Supreme Court decision stopped New York’s foam ban, ruling that the Sanitation Commission failed to demonstrate that the packaging material could not be recycled cost-effectively. Now that decision has been appealed by New York City.

Now, New York City has appealed the decision. “We disagree with the ruling, and we are asking a higher court to review the decision regarding the ban on expanded polystyrene,” said Sanitation Commissioner Kathryn Garcia. Read more.

Pallet pooling provider LPR is warning retailers to ensure that pallets are secured, as Bonfire Night approaches on November 5. The company estimates that 140,000 pallets will bbe burned, at a value of £1.4 million.

“There is a common misconception that pallets are disposable, but this is far from the truth,” Astates drian Fleming, managing director of LPR UK and Ireland. “As a precision-engineered and expensive piece of equipment, the retail industry expects to receive a certain lifecycle from each pallet.” Read more.