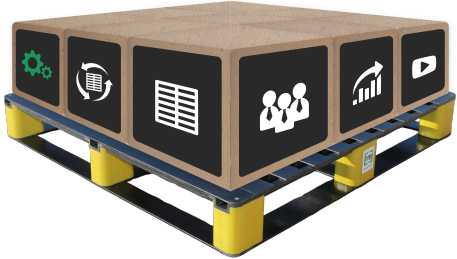 The sales outlook is strong for significantly expanded deployment of its pallets over the remainder of 2015 and into 2016, according to RM2 International, a manufacturer of composite pallets. A pretax loss of USD47.3 million for 2014 was experienced by the company, improving from a loss of US$77.2 million in 2013. Meanwhile revenue rose to $2 million from $104,000, based on production during the second half of the year. Demand for outright purchases was more significant than anticipated.

Last July, RM2’s production facility in Vaughn, Ontario became fully operational, according to the company, now with with robust processes in place to fulfill future contracts and facilitate manufacturing of pallets in substantial numbers.

“We are now producing pallets in increasing numbers which enables us to engage with leaders of large global businesses about their deployment and makes the coming months very important for RM2. Thus far the response of these key individuals has been very satisfactory, and we are confident in the future,” said Chief Executive Officer John Walsh.

The company’s IPO in January 2014 raised USD 218 million. Funds were used to establish its Ontario facility and upgrade its plant management team.

“During the period of lower production where we established our new manufacturing facility, we focused on smaller users, or local decision makers, for whom our previous production levels were adequate,” CEO John Walsh and Chairman Ian Molson said in a joint statement. “Now we have increasingly clear expectations of which organisations will pioneer large scale implementation of BLOCKPal across a number of sectors and where there is generally board level engagement. Our focus is on deploying, by rental or sale, BLOCKPal in areas where goods are fast moving or the problems associated with other pallets are most acute and where pallet retention is strong, typically internal or inbound movements.

“We have taken the opportunity to refine our marketing to focus even more strongly on the wider attributes of the BLOCKPal which we are confident will drive penetration as users become familiar with the pallet and the company. As well as the overwhelming advantages of strength, durability and sustainability which as previously reported were proven in an independent Life Cycle Analysis report, our discussions indicate that areas including hygiene, health and safety, and handling will be significant drivers of change.

“During the year under review, as previously reported, there was very limited production due to the factory move and other changes associated with a transition to a mass production facility and processes. During this period we have paid for all the plant and machinery and whilst there is some further capital expenditure being incurred in 2015, this is largely focused on areas in which the new production facility management have identified significant efficiency opportunities. Building a mass production facility with such production levels also led to very high operating costs relative to production which are expected to become much lower in the future with increased production.

“Although the Company retains strong cash balances ($82.8 million at 31 December 2015), as actual production levels build up, capital requirements increase. As a result, we are reviewing financing proposals and are confident of putting satisfactory facilities in place to fund expanded production against contracts.

“As our production levels increase, the challenge for RM2 is to build a matching forward order book with an appropriate client base that gives scale in parts of the supply chain that match our velocity and retention targets. We believe we are engaged across a range of sectors with key individuals in leading organisations and that demand will grow significantly during this year and next.”

In March, RM2 announced a significant agreement with PPG  Industries, following up with a new announcement that it has agreed to the sale of a significant number of pallets to a second major industrial customer. “We expect outright purchases to remain a smaller part of the business than rentals,” the joint statement continued, “but for these industrial clients, who have a deep understanding of the strength, durability and other attributes of composite engineered products, purchase is both an attractive option and a great endorsement of the product.”