You are here: Home / Announcements / Reusing 10% Will Stop Almost Half of Plastic Waste From Entering the Ocean

Geneva, Switzerland, 22 July, 2021 — It is possible to prevent almost half of annual plastic ocean waste by reusing just 10% of our plastics products. This is just one of the key findings of The Future of Reusable Consumption Models Report.

The report is a collaboration between the World Economic Forum and Kearney and suggests that shifting from single-use towards a ‘reuse’ model of consumption can help society regain ground in the fight against plastic waste. Currently, 50% of global plastic production is for single-use applications and only 14% of global plastic packaging is collected for recycling. The report outlines the urgent need to drive a systemic shift towards reuse models as an integral part of the reduce-reuse-recycle agenda.

The need for a more reuse-centered economic model is urgent and grows more so with each passing year. It is up to all stakeholders to answer the call.

“The shift from disposable consumer goods to reusables is still in its early stages, but there are already signs of progress,” said Zara Ingilizian, Head of Consumer Industries and Consumption at World Economic Forum. “Just as recycling and composting were once considered eccentric and electric cars were written off as science fiction, when it comes to sustainability, attitudes about just what is viable are changing rapidly. Reuse may well prove to be among the most potent manifestations of that shift.”

‘Reuse’ is a production and consumption model gaining ground around the world as an alternative to single-use. In this model, consumer items are designed to be used several times, generating added value across the economy.

The findings are based on proposals by governments and NGOs around the world and research conducted with senior leaders from private and public sectors. The team conducted in-depth interviews, data analysis and scenario modeling to create first of its kind framework that can be applied across consumer product categories and geographies.

Three scenarios show how much plastic waste could be reduced from ocean and landfills if a reuse model is used.

Scenario Two Reusables make up between 20% and 40% of packaging, equivalent to 90–185% of annual plastic ocean waste or 25–50% of plastic landfill waste.

Scenario Three If between 40-70% of all packaging is reusable, it would equal anywhere from 185% to 320% of annual plastic ocean waste or 50–85% of plastic landfill waste. 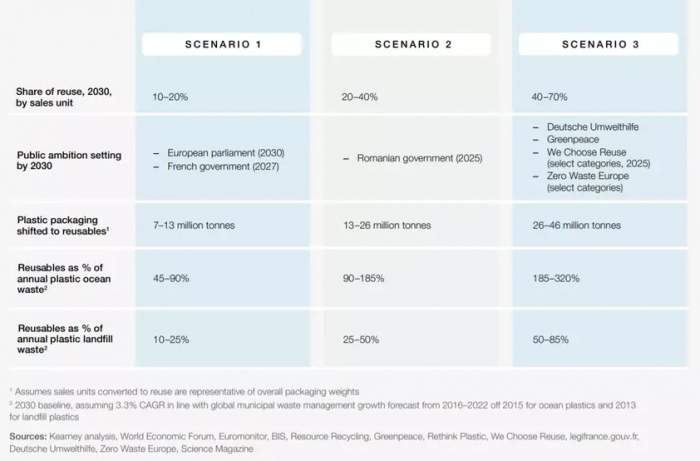 “We need to shift from merely “treating” or “handling” waste to simply never creating it in the first place, observed Beth Bovis, Project Leader, Partner, Leader of Global Social Impact & Sustainability at Kearney. “But any shift towards reusable consumer goods will depend on the choices and actions of the three driving forces of our economy: consumers, the private sector, and the public sector. Each of these groups has a unique role to play in making reuse a reality. The need for a more reuse-centered economic model is urgent and grows more so with each passing year. It is up to all stakeholders to answer the call.”

“When we talk of the three scenarios, it is worth emphasizing that any of these scenarios would represent extremely valuable progress over the present status quo,” emphasized Mayuri Ghosh, Head of Consumers Beyond Disposability initiative, Future of Consumption Platform at World Economic Forum. “The plastic waste challenge has grown too large for us to simply recycle our way out of. With no global agreement over an ambition level to target plastic waste, the sooner we can make systemic and meaningful advance towards reuse, the better.”

The report takes a deep dive into the three scenarios and provides detailed information on the methodology. It addresses some of the key challenges businesses and the public sector have faced about reuse, namely, how to make reuse scalable and viable.

The report aims to give leaders in business, government, civil society a clear picture of an alternative plastic waste-reduction model. The first half of the report discusses the three primary actors of systems change required. The second half presents the Reuse Viability Framework to help leaders make reuse scaleable and viable.

It calls for the public and the private sectors to collaborate on the development of reuse systems to meet the needs of our economy and the environment. It is part of the World Economic Forum‘s Consumers Beyond Disposability initiative, which focuses on innovative reuse solutions, and has been working to test and scale such solutions.