This week, RPCs are in the news from both New Zealand and Australia, and in the United States, RPA has announced its speaker schedule for upcoming PACK EXPO event. RPP Containers celebrates 15 years, while innovative loading platform supplier PACK LESS has issued its latest update. PACK LESS will be on display at the upcoming Movimat Expo in Sao Paulo Brazil. FEFPEB also reached out to remind everyone of the upcoming Interpal Vlll global pallet event, taking place mid-October in Bordeaux, France. 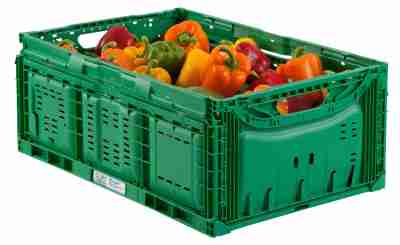 Meanwhile, CHEP Australia  and Aldi have jointly announced the introduction of CHEP’s new GEN 3 crate for fresh produce distribution. Of particular note is its significantly improved cube efficiency when collapsed for return.

With the PACK EXPO  show only weeks away, the RPA has announced its reusables presentation schedule for the event. I’m looking forward to meeting readers there.

Congratulations go out to United Pallet Services, Inc., the sales and marketing arm of the recently patented The pointGUARD Pallet Protector, which was given the 3rd place award at The Recycling Innovators Forum on August 26th in Louisville, Kentucky.  Read more.

Best wishes are also in order for RPP Containers, which is celebrating 15 years of service to the bulk container market.