You are here: Home / Announcements / Recycled Plastic Content Pledges Won’t Save the Oceans 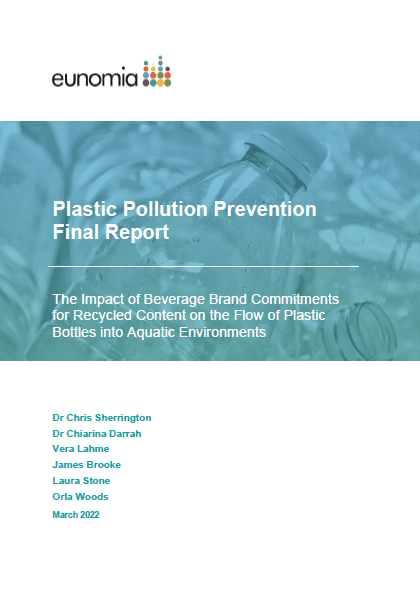 WASHINGTON, May 12, 2022 – A new study commissioned by Oceana has exposed the weakness of plastic recycled content pledges by giants like The Coca-Cola Company and PepsiCo. The analysis, conducted by Eunomia Research & Consulting, found that if the top five beverage companies meet their pledges – and it’s far from certain that they will – these pledges would only reduce aquatic pollution from single-use plastic bottles by 7%. In response, Oceana is calling on major beverage companies to adopt or expand strategies that prioritize refillable bottles.

“This report uncovers some worrying realities. It seems improbable that the recycled content pledges by large soft drink companies will be met, and regardless, they won’t go far in helping the oceans,” said Dr. Dana Miller, Oceana’s Strategic Initiatives Director.

“Adding more recycled content doesn’t stop a single-use plastic bottle from reaching the seas, but replacing that bottle with one that will be reused does. Recycling alone is not the solution that our oceans need. Our oceans need us to return, refill, and reuse our bottles instead.”

The Coca-Cola Company, PepsiCo, Nestlé, Danone, and Keurig Dr Pepper have pledged to increase post-consumer recycled content in their polyethylene terephthalate plastic (PET) bottles by targets mainly ranging from 25 to 50% by 2025. But, according to Eunomia’s analysis, achieving these targets would require collecting an additional 2.57 million tonnes (2.83 million U.S. tons) of plastic bottles for recycling each year.

However, there is no coherent strategy in any global region apart from Europe to reliably increase the supply of recycled PET for the production of bottles. Achieving this would likely require significant government intervention. Recycled PET sourced from plastic bottles is also high in demand for other uses like making other plastic packaging, clothes, and toys, and this demand is steadily growing.

Of the approximately 511 billion PET bottles used in 2018 in the 93 coastal countries included in the analysis, an estimated 35.8 billion bottles entered aquatic systems. Even if the companies could live up to their pledges, their current commitments would have little impact on reducing marine plastic pollution, Eunomia found. This is mainly because bottles used for recycling are expected to predominantly be derived from already collected and managed waste streams rather than mismanaged waste or littering. If all brands reached their targets, 33.4 billion bottles (93%) would keep flowing into rivers, lakes, and oceans.

“Our study found that significantly reducing the flow of used PET bottles to aquatic environments requires collection infrastructure to be introduced in places where none currently exists,” stated Chris Sherrington, Project Director for Eunomia.

“While increased demand for recycled plastic content can be expected to lead to a greater focus on obtaining used bottles, it doesn’t necessarily follow that this will all translate into the establishment of new collection infrastructure while opportunities continue to exist to divert already collected bottles from going to landfill or incineration.”

Eunomia’s study also discusses how to increase the beverage sector’s collection rates, including refillable bottles. In 2020, Oceana published a report which found that increasing the market share of refillable bottles by just 10% in all coastal countries in place of single-use PET bottles could reduce PET bottle marine plastic pollution by as much as 22%. Suppose major soft drink companies want to reduce the billions of plastic bottles entering the oceans each year. In that case, Oceana calls on them to provide a refillable option to consumers worldwide.

The opportunity for refillables

Miller added, “Leading soft drink brands need to stop distracting consumers concerned about ocean plastic pollution with pledges about recycled content. The companies responsible for this crisis facing the oceans need to focus more on solutions that can further tackle the problem – like refillable bottles.”

Refillables have proven to be very effective at reducing waste. Companies own, track, and collect these bottles, and people who buy refillable bottles typically return them to the place of purchase in exchange for a ‘bottle deposit’. The bottles are then collected, washed, refilled, and delivered back to stores where they can be purchased again. Refillable bottle systems create less plastic waste as each bottle can be used up to 20 times if PET or up to 50 times if glass.

Following campaigning by Oceana and its allies, in February of this year, The Coca-Cola Company announced a significant commitment to reach 25% reusable packaging by 2030, leading the way for other companies to follow suit. A month later, PepsiCo announced that it would be making its own time-bound goal on reusable and refillable bottles by the end of 2022.

Oceana celebrates these announcements but underlines the importance of these commitments being met and for the companies to embrace refillable bottles as a core business strategy, leading a global revolution back to a former, less wasteful way of living.

To create meaningful change, Oceana is calling for:

Oceana’s campaigns are delivering results with more than 225 victories that stop overfishing, habitat destruction, pollution, and the killing of threatened species like turtles and sharks. A restored ocean means that 1 billion people can enjoy a healthy seafood meal, every day, forever. Together, we can save the oceans and help feed the world. Visit www.oceana.org to learn more.