After former CEO Bob Moore left the helm of iGPS, it seemed that the plastic pallet rental company was thankfully headed for a lower profile and less notoriety. But then iGPS found its way back into the headlines in June, as the month began with a bankruptcy and sale announcement by iGPS, and is now closing with some harsh criticism from a government bankruptcy watchdog.

The sale, involving substantially all iGPS assets, was made to iGPS Logistics LLC (“iGPS Logistics”), a joint venture formed by Balmoral Funds, One Equity Partners, certain of their affiliates, and Jeff and Robert Liebesman. 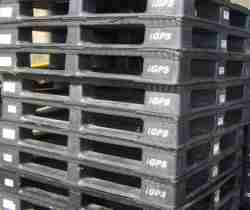 One Equity Partners is a shareholder in plastic pallet manufacturer Schoeller Arca Systems, which supplies iGPS pallets. According to court documents, Schoeller Arca was the largest creditor of iGPS, owed $5.4 million, and that 1.5 million iGPS pallets were missing.

At the time of the announcement, iGPS commented that the deal is subject to higher and better bids and Court approval. Crystal Financial LLC has provided a Debtor-in-Possession facility to support the company through the sale process and intends to facilitate the emergence with exit financing.

This week, however, an article posted at Nasdaq.com is reporting that the credibility of the sale has been brought into question, with opinion from a government bankruptcy watchdog that the company may be worth substantially more than the amount offered.

Quoting documents filed with the U.S. Bankruptcy Court in Wilmington, Delaware, the article quoted U.S. Trustee Roberta A. DeAngelis as saying she “is informed and believes the Debtor’s assets may have substantially greater value than indicated.”  She also criticized the “overly aggressive timing” and fees associated with the proposed sale.

While iGPS secured an offer worth $49 million plus assumed liabilities from the purchasing group, the Chapter 11 filing earlier in June estimated its assets as ranging between between $100 million and $500 million in value.

Ms. DeAngelis said in court documents that there was “no record to support a proposed sale for $49 million.” She added that the “aggressive timing, when one takes into account the fact that all dates fall around the Fourth of July, appears interposed primarily to produce a predetermined result, a sale to (the lender group) for $49 million plus assumed liabilities. The timing does not appear at all designed to induce or attract alternative bids.” She also was critical of $1.05 million in breakup fees as well as $400,000 expenses reimbursement.