You are here: Home / Announcements / The Plastic Timeline: How Did We Get Here?

According to statistics from Statista, global plastic production totaled 359 million metric tonnes in 2018. The UK produced 99 kilograms of plastic waste per person, per year, second only to the US, which produces 105 kilograms.

Using the information from Statista, we have documented global plastic production from 1950 to 2018 and analyzed it alongside global population figures and the introduction of new laws. From this, we’ve created a graph to show exactly where we are in terms of our use of plastic. 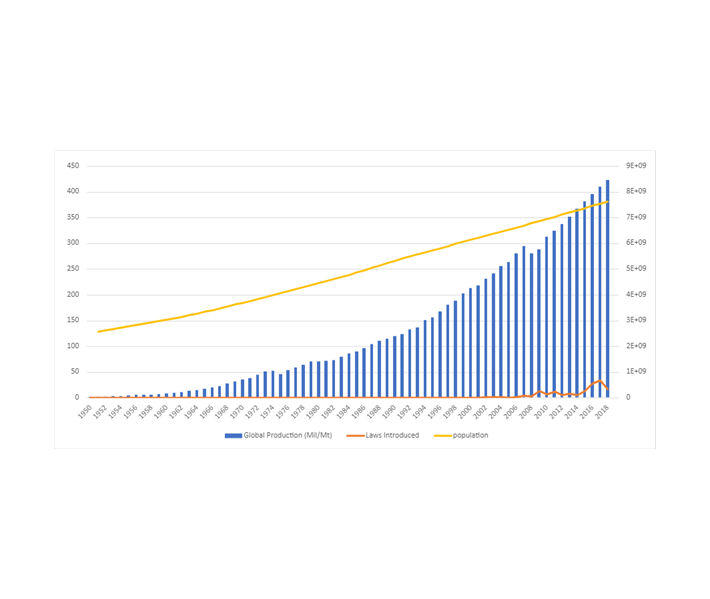 From the graph, you can see the rise in plastic production is in line with population growth. This also correlates with the fact that laws relating to plastic only started to become more common from 2006 onward.

But, as the key talking points show, there’s plenty to discuss when it comes to the plastic timeline.

As shown on the timeline, global laws started to become more common. At least 23 laws, levies or pieces of legislation were introduced between 2008 and 2010 in 21 different countries.

Laws started to reach their peak around 2017.  Free disposable plastic bags were banned in Catalonia, and Slovenia rolled this ban out on a national level.

But plastic production started to surpass population growth at this time. The reason? Well, global e-commerce sales totalled $2.38 billion in 2017, hitting $3.54 billion last year. The online boom comes with the need for packaging, which is often plastic.

In 2018, new laws started to tail off, but production and population levels continued to rise. This may be due to the fact that certain laws, levies, and legislation had been introduced in previous years, but it opens the debate that there’s still work to be done in order to help solve the world’s plastic problem.

There are encouraging signs though. In October 2020, a UK ban on the supply of plastic straws, stirrers, and plastic-stemmed cotton buds came into force.

The ban was introduced after it was revealed the UK was using 4.7 billion single-use straws, 316 million plastic stirrers, and 1.8 billion plastic-stemmed cotton buds each year.

Like many other countries, the UK already has a levy on the use of plastic bags in shops. When the levy was introduced in Northern Ireland back in 2013, usage dropped by 71% in just one year. Scotland followed in 2014 and England in 2015—with the rule mandatory for companies that employed over 250 members of staff.

Plastic timeline: facts over the years

Over the years, plastic has been produced by many industries across the world and used in everyday items. Here’s a list of some historic plastic facts over the years.

This article was submitted by Loadhog. To find out more about Loadhog’s durable Pally, visit www.loadhog.com.