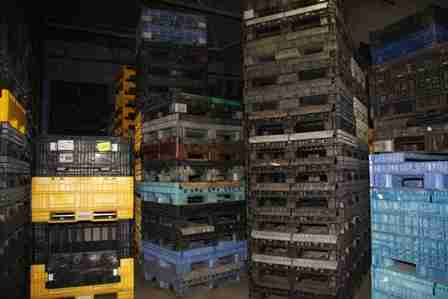 Damian Massa 52, of Mason, James Tabor 43, of Carleton, Zaklina Tabor 40, of Carleton, and David Wendler 40, of Monroe, face criminal charges for the alleged theft and subsequent selling of plastic pallets used in Michigan’s automotive industry. The charges are the result of an undercover operation conducted by the Livonia Police Department with assistance from the Michigan Attorney General’s Office, and General Motors Corporation.

“By cracking down on crime and corruption, Michigan can once again be a safe, profitable place to do business,” said Schuette, “Our office is committed to partnering with local law enforcement to bring down criminal organizations wherever they operate.”

It is alleged that the suspects were involved in a racketeering operation where plastic pallets used in the automotive industry, valued between $300 and $500 each, were stolen from industrial yards, and then fenced through legitimate and illegitimate businesses. Schuette’s office is working in cooperation with the Livonia Police Department to ensure that all aspects of the alleged criminal operation have been halted.