This article first appeared in April 2010.

Representatives from IDFA and several member companies met in Chicago this week for the first national cross-industry coalition meeting to combat the loss of milk crates, bakery trays, beverage shells and other recyclable assets. The group aims to build on successful regional grassroots efforts to raise awareness, foster protective legislation and educate employees on the value of these assets. 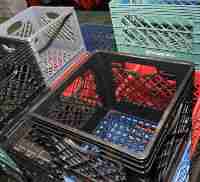 J.R. Paterakis of H&S Bakery recounted the success that a coalition of Mid-Atlantic companies had last November, resulting in indictments for five people in Maryland. James Rood, a former Baltimore detective and now private investigator who worked on the case, explained his strategy for pursuing criminals and shared a brief surveillance video.

Rood recommended a variety of steps companies can take, including forming local coalitions and meeting with state legislators to propose bills that would deter plastic asset theft. Without adequate state legislation, Rood said, proof of theft is difficult, local law enforcement and prosecutors are reluctant to get involved, and criminals have no incentive to quit what has become a lucrative and now international business.

Upstate Niagara Presents Dairy Perspective
To provide the dairy industry perspective, John Wilhelm, director of purchasing for Upstate Niagara Cooperative, Inc., joined colleagues from Sara Lee and H&S Bakery in a dynamic panel discussion. Each provided a snapshot of the savings their companies had achieved once they implemented targeted plans and made plastic asset management a company-wide priority.

Another panel comprised of Coca-Cola, PepsiCo and Anheuser-Busch representatives discussed the huge impact that plastic tray theft is having on the beverage industry.