PGS Group (Palettes Gestion Services), a leader in the wooden pallet sector, has announced that through its subsidiary BEYNEL it has taken an equity stake in the Spanish company Maderas  Jose Saiz. 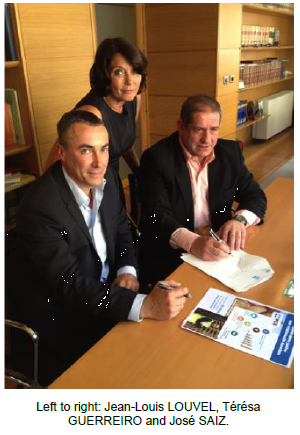 This new operation for PGS outside France confirms its ambitions for an international growth strategy: its subsidiary BEYNEL recently took a first 20% stake in the capital of the leading Spanish producer of sawn timber for pallets. Jean-Louis Louvel, Founding President of PGS Group, sees this as an “engagement period” in preparation for something closer to total union.

The Maderas  Jose Saiz sawmill (which had turnover of €30M in 2013) is located at San Vicente de Toranzo, near Santander in Cantabria. It is the largest Spanish producer of wooden pallets with an annual production of 350,000 m3 of sawn timber (80 percent of which is used for packaging, 15 percent for construction and 5 percent for carpentry). The mill processes 780,000 tonnes of lumber per year and has two Cape pallet production lines, one of which is currently being installed.

“I’m delighted to be working more closely with José Saiz”, observes Jean-Louis Louvel. “We were able to take a stake in Maderas  Jose Saiz because the company wished to increase its capitalisation by almost 3 million Euros, to give it the necessary financial resources to carry out its development plan in Spain.”

Maderas  Jose Saiz also owns a sawmill in France, at Lesperon (between Bordeaux and Biarritz), which has six drying kilns producing 25,000 m3 of sawn timber a year for PGS Group’s pallet construction plants. Lastly, Maderas  Jose Saiz (with a workforce of 200) has its own forests yielding 300,000 tonnes of lumber per year.

“Spain will provide new growth opportunities for PGS Group, because now that we have secured our supplies of sawn timber we are planning, with José Saiz, to set up a new production site in Spain very soon, equipped with a Corali production line,” says Louvel. “With this new facility our annual capacity for pallet production will soon exceed 3,000,000 units in Spain and will take the Group to a new high of almost 22 million new pallets.”

The site’s proximity to the port of Santander will facilitate exports of sawn timber, especially to countries where PGS has recently started new operations (Ras Al Khaimah in the United Arab Emirates, and in Morocco), and will help with new projects abroad.

Térésa Guerreiro is Director General of SAS BEYNEL, which in March 2013 also acquired the F. ARNAUD production unit at Préchac, near Bordeaux. She says that “being able to draw on José Saiz’s knowledge of the business, acquired over 40 years, will be invaluable in setting up a new sawmill at our SALLES site (also in the Gironde département) as rapidly as possible. With this new sawmill in the Aquitaine Region and our closer collaboration with José Saiz, PGS’s annual production capacity will be close to a million cubic metres of sawn timber. We will benefit from considerable synergy and the sharing of resources.”

Lastly, José Saiz  agrees that “this initial involvement by PGS Group via the stake taken by Beynel helped me raise a considerable sum with which to expand my business, while also reassuring me that it has a long-term future as I approach the age of 62.” Térésa Guerreiro and Jean-Louis Louvel will be working closely with José Saiz at senior management level to learn all they can about his company.

About the PGS Group

Founded in 1993, the PGS (Palettes Gestion Services) Group is the French and Belgian market leader in the fields of new and reconditioned wooden pallets, moulded presswood pallets and sawn timber for pallets. The company’s comprehensive product offer and European network make it a leading logistics partner in the packaging sector. In 2013, PGS had a consolidated turnover of €170 M. The Group employs nearly 1,000 staff. PGS owns 6 saw-mills, 13 pallet-manufacturing plants and 28 pallet-reconditioning sites. Each year, the Group’s manufacturing facilities produce 280,000m3 of sawn timber, a total of 18.6 million new pallets and 14 million reconditioned pallets. For further information: www.groupepgs.com