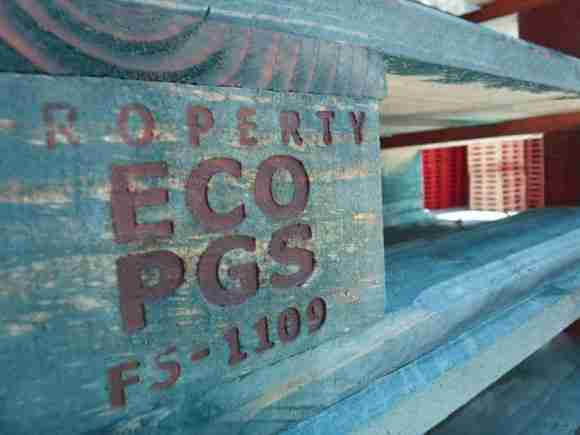 France-based PGS Group (Palettes Gestion Services) has achieved record growth over the last 5 years, including a 27 percent increase in 2014, while turnover has practically doubled between 2010 and 2014. The 2014 turnover of €211 million exceeds its goal of €200 million. 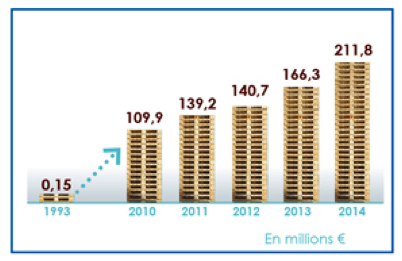 This, PGS explains, was a huge achievement in a difficult economic environment with the industry particularly under pressure in France, which constitutes its main pallet market. More recently, the first six months of activity for 2015 show that this growth is continuing, in keeping with its objective of reaching €500 million in annual turnover by 2020. This strong increase in 2014 is attributed to organic growth stimulated by expansion through new sites, especially in the United Arab Emirates (PGS Middle East) and Morocco (PGS Morocco), and the setting up of partnerships or joint ventures, combined with external growth such as the acquisition of the Belgian company DE BACKER in January 2014.

PGS attributes its success to a purposeful strategy. Before moving to the international stage,  the company solidified its position in its home French market, not only by vertical integration of its pallet supply chain via sawmill, pallet manufacture and reconditioning operations, but also by expanding in regions where the Group had not previously had an adequate presence, as had been the case until recently in Brittany.

“By being close to our customers, our senior managers are able to interact closely with the regional ecosystem and decision-makers,” explains Jean-Louis Louvel, Founding President of PGS Group. The company broadened its range of products and services in 2014, offering cardboard pallets, the eco-designed ECO-PGS pallets, and also relocation services offered through RLS (Reverse Logistics Solutions), which also contributed to the expansion of PGS.

Even as PGS continues to expand in terms of products, services and geographic coverage, Louvel emphasizes that the key factor in the success of his Group lies in its workforce, which today numbers 1300. “For 22 years, we have always placed people at the center of our concerns,” he says. “And we are proud of our corporate culture, which generates an outstanding spirit of cooperation.”

Drawing upon his own career as a self-taught entrepreneur, Louvel emphasizes a practice of internal promotions to complement external recruitment. Through a policy encouraging the motivation and loyalty of its employees, the company ensures their strong involvement. In addition, before a new company is acquired by the Group, the management does its utmost to ensure that it shares the same social, societal and environmental values, in order to avoid any restructuring. This guarantees smooth integration of the teams, with the aims of both pooling experience and of enabling these additional human resources to contribute fully to the Group’s activities, while benefiting from new professional opportunities.

“We foster the pooling of experience and the loyalty of our human resources, which allows us to maintain flexibility and rapidity of execution,” adds Louvel. Mentoring schemes between older employees and young recruits also promote the sharing and transmission of knowledge.

PGS recently embarked on a three-year plan to roll out an ERP software suite across all 10 of its French sawmills and pallet manufacturing facilities. “By implementing this new information system incorporating an innovative data management component we will further strengthen our processes both at each of our units in France and for our support services,” explains Pascal Mondet, General Manager of PGS France. “In this way, we will increase our capacity for harmonisation and rationalisation of our activities so as to be even more efficient and closer to our customers.” explains Pascal MONDET, General Manager of PGS France. The project will see the ERP system deployed at the first two production sites in the middle of 2015 and completion in 2017. Last October, the PGS Group also finalised the deployment of another ERP system for the twenty French sites where pallets are reconditioned.

PGS is also adapting its infrastructure to host and bring together all of its support services, such as the recent construction of 1800 sq metres of offices at Salles (Gironde) near the Beynel plant – which the company is quick to point out is sourced from wood originating in nearby forests! In addition, on the financial side and with assistance from France’s Public Investment Bank, PGS raised a first round of €10 million in 2014, thus lessening the pressure on its own capital and providing it with the means for its future investments and development projects.

The goal set by the Group is to reach €500 million in turnover within five years by maintaining dynamic growth in the international market, driven by Michael Modugno, Founding Vice-President for International Development. By 2020, half of the turnover will be generated outside France, both through increased business in Belgium and Spain, and by expanding very soon in new neighbouring countries and even more distant ones.

Louvel remains convinced that the success of his entrepreneurial adventure owes more to the principles he set himself from the outset, to strictly respect his commitments and stick to his fundamental values. For the Founding President, who in his youth was something of an expert at such board games as chess or “Risk”, his career has been an exciting game of strategy and conquest – and he shows no signs of tiring of it all.

Founded in 1993, the PGS (Palettes Gestion Services) Group is the French and Belgian market leader in new and reconditioned wooden pallets, moulded presswood pallets and timber for pallets. The company’s comprehensive product offer and network inside and outside France make it the leading logistics partner in the packaging sector.