You are here: Home / Announcements / Paxxal’s New Plastic Pallet Offers the Performance of Plastic at a Price Converging on Wood

Pallet provider combines inexpensive proprietary material and rotomolding improvements to deliver what it believes to be the future of plastic pallets. 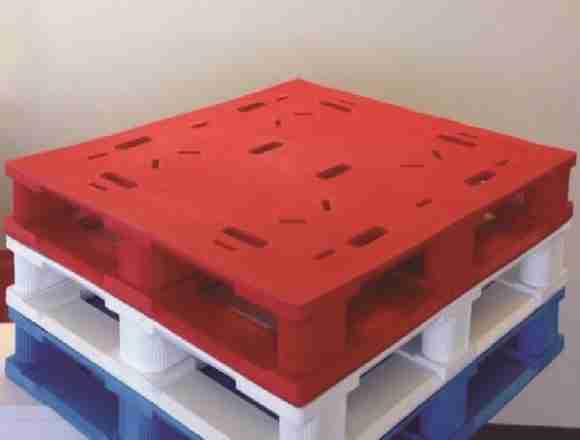 While the first three trends are supported by several plastic pallets in the market, Stoller believes their new Paxxal plastic pallet is ready to deliver regarding extremely competitive pricing that is converging on the cost of a comparable wood block pallet. He noted that HDPE in plastic pallets runs around 60 cents per pound. “What we do is take out about 30% of the HDPE cost by utilizing our proprietary earth aggregate material,” he said, “which is $50 per ton. He stressed that $50 stretched over 2,000 pounds is “a serious competitive advantage to 60 cents per pound.”

Stoller is a plastic pallet industry veteran, having served as a financial and operations executive for seven years at iGPS. He came aboard Paxxal in 2014. He said the interest generated at the ProMat 2017 show was a gratifying response to the efforts the company has made to build a product that addresses customer needs.

“The past summer we convened a two-day roundtable of pallet users at our headquarters and innovation center in Noblesville IN to review our design of our new North American plastic pallet,” Stoller explained. Attending the meetings were some of the largest FMCG (fast moving consumer goods) manufacturing and retail grocery customers, as well as suppliers and vendors, poolers, recyclers, and technology partners.

“These participants added invaluable input on our final prototype design and finalization of our pallet,” Stoller continued. “We then had the tooling built and are currently providing samples of the new pallet. We are working with multiple partners such as Virginia Tech for testing of our plastic pallet.”

When the new pallet was released at ProMat, Stoller described it as “the most durable, lightweight, cost effective pallet available in the multi-use plastic pallet market.”

While rotomolding, the manufacturing technology used to produce Paxxal pallets, is typically considered a slow manufacturing process, Stoller stated that the company has taken rotomolding into the 21st century.

“We have created IP around our manufacturing process and production machine design, which has revolutionized the way we manufacture,” he continued. “Further, we have engineered an automated process that allows us to build multiple parts in very reduced cycle times bringing the cost per unit down significantly.” While the specifics are proprietary, it is centered around automation. “Combine this with our lower cost material and patent pending pallet design and that is our firm’s competitive advantage,” he explained.

Paxxal is currently finalizing the location for construction of its new plant. Stoller indicates it will either be located in northeast Ohio or central Indiana.

In addition to FMCG, Paxxal is targeting the automotive, electronics, and pharmaceutical industries.