Pallet statistics and pallet market information presented below has been aggregated from several sources.

The research was based on a survey of wood pallet manufacturers and recyclers, as well as pallet brokers, with reference to the 2016 fiscal year.

Slides from the research shown below sourced at www.palletcentral.com. 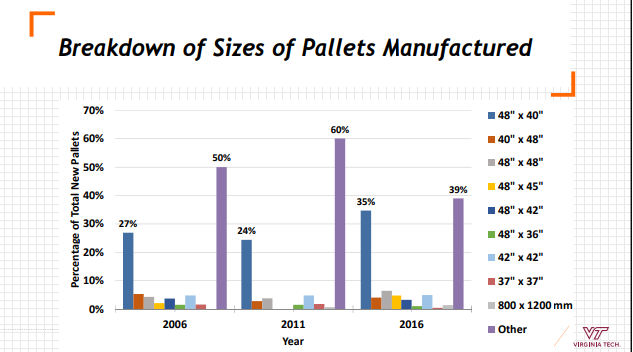 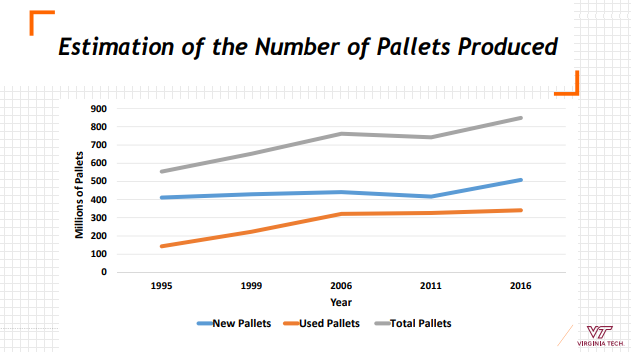 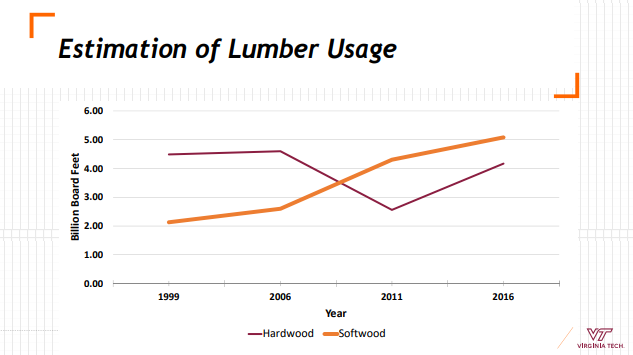 “You may have heard reference to there being 2 billion pallets in the U.S.,” Philip Araman told the audience at this year’s (2015) Western Pallet Association Annual Meeting. “That number comes from us.”

Indeed, the reference to the 2 billion pallets estimated to populate the U.S. pallet pool seems to find its way into most every pallet industry business case and analysis as ambitious projections about potential market capture are made for new pallet products and services poised to transform the market…but is it accurate? I asked Phil, and he assured me that the 2 billion pallet estimate is relatively accurate, based on their research, although that research has never been published.

Phil is a researcher for the U.S. Forest Service in Blacksburg, Virginia. The group works closely with Virginia Tech.

“We (US Forest Service/VA Tech) have many years of working with your (pallet) industry,” Phil told the group. Their research involves monitoring new pallet manufacturing, pallet recovery/repair/reuse/recycling, as well as waste pallets to landfills. Additionally, the group performs research to support pallet design software PDS and Best Pallet to make better pallets.

Based on surveys and estimates, his research group has generated the following numbers with respect to the U.S. pallet industry:

Here are some of Phil’s noteworthy visuals from his presentation. 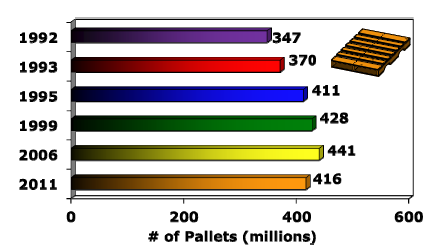 As the graph at right shows, new wood pallet production has been rather flat, registering 416 million units in 2011.

Meanwhile, recovered pallet production has grown dramatically in recent decades as shown by the graph at left below. 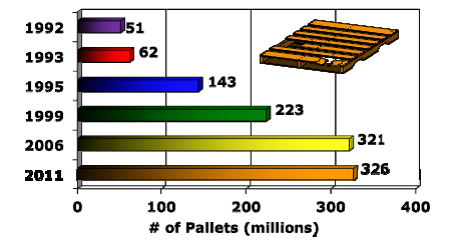 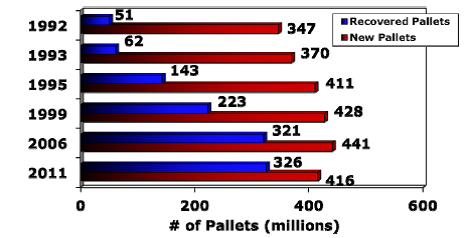 So what does it all mean? Given that wood pallets still command over 90 percent of the market, if we can believe that number, it gives us a sense of the overall market. The growth of recovered wood pallet sales indicates their acceptance by the market as the quality of used pallet offerings has continued to improve, providing a better value proposition for many users.