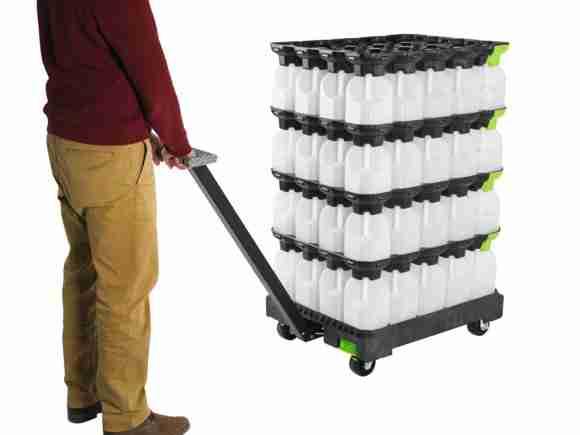 OCONOMOWOC, Wis. — March 26, 2019 — ORBIS® Corporation, an international leader in reusable packaging, has launched a fully reusable, retail-ready, one-touch merchandising system designed for retail deliveries. At ProFood Tech 2019, ORBIS is introducing the XpressBulk® Milk Delivery System for the transport of fluid milk from the truck to the retail cooler with only one touch. ProFood Tech is in Chicago, March 26-28.

The XpressBulk Milk Delivery System is comprised of a dolly, removable handle and four plastic contoured trays. It minimizes physical labor at retail and streamlines merchandising in two key ways. First, the dolly allows for easy transport off the truck and right into the cooler, for quicker unload. Second, once the system is placed in the cooler, no unpacking or additional touches are needed because consumers shop directly from the XpressBulk system. The dolly and trays are custom designed to fit the bottle being transported.

The XpressBulk Milk Delivery System also meets small-format needs. As urban retail locations become more common, small-format packaging solutions are preferred. The small-format footprint and contoured optional handle of the new system allow it to be easily maneuvered through narrow aisles and doorways. When it’s not being moved, the handle can be removed for increased storage room in and out of the coolers. Also, the dolly’s condensed height allows the ability to cube out merchandising coolers, creating space for additional SKUs and ultimately increasing sales.

“One of the key advantages of the XpressBulk Milk Delivery System is that the one-touch feature enables retail associates to reallocate the time they typically spend unloading and stocking, to other retail needs, such as customer service or e-commerce order picking,” said Ludka. “ORBIS understands employee time is valuable and wants retailers and grocers to have flexibility in how their workforce uses their time and skills.”

Even after use, the XpressBulk Milk Delivery System provides storage and return efficiencies. Its trays collapse into one another for a snug fit, and the dollies can be stored on top of each other for optimal space in backrooms. In addition, color-coded trays visually cue employees to stack them for efficient nesting for return trips. The XpressBulk Milk Delivery System also is designed to interface with standard material handling equipment. Together, these features support the entire retail supply chain, from the manufacturing plant to the retail aisle.

For every visitor to the ORBIS booth at ProFood Tech, ORBIS is donating three gallons of milk to the Greater Chicago Food Depository, which is recognized as one of the leading charities in Chicago. In partnership with 700 agencies and programs — including pantries, soup kitchens, and shelters — it distributes food where it is needed most throughout Cook County while striving to end hunger in the community. In 2018, the Food Depository distributed approximately 70 million pounds of food. The milk donated by ORBIS will help support the network’s donation efforts in the Chicago area.

The XpressBulk Milk Delivery System can be customized for a wide variety of high-velocity grocery items. To learn more about the new system for bulk merchandising and retail deliveries, visit ORBIS at ProFood Tech, Booth 429, or visit orbiscorporation.com.