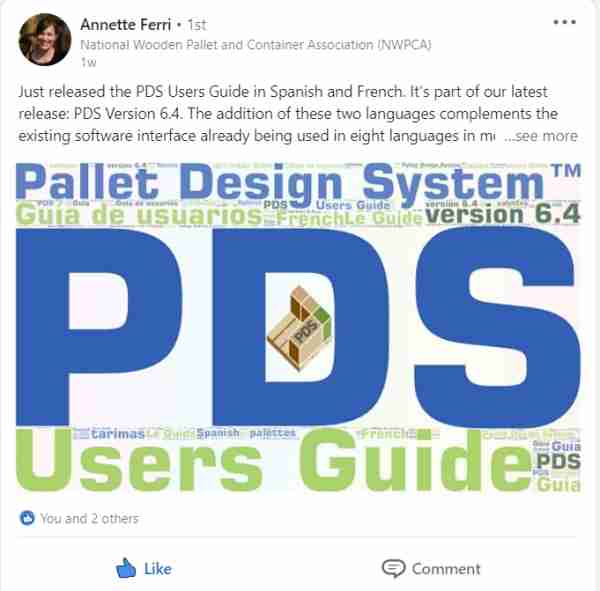 The National Wooden Pallet & Container Association (NWPCA) has released Pallet Design System™ (PDS) Version 6.4. The main feature in this release is a translation of the PDS User’s Guide in Spanish and French. The addition of these two languages in the User’s Guide complements the existing software interface already being used in eight languages in more than 30 countries and further expands its global accessibility in pallet design.

The User’s Guide is considered the authoritative book on pallet design with its glossary, tables, and other terminology. There is a wealth of information in the 300+ page Guide with numerous solutions to the most common questions in pallet design.

“From fasteners to lumber, pallet designers learn more about how different aspects of these components can impact overall pallet performance,” said Brad Gething, Ph.D., Vice President, Science & Technology. “The national and international wood species tables and fastener characteristics are invaluable tools in the User’s Guide and referenced quite frequently, whether or not you’re using PDS for pallet design.” The Guide was carefully reviewed and updated during the translation phase for a more intuitive, user-friendly product.

“The User’s Guide in PDS does such a great job of explaining how to use a particular feature, so there is zero reliance on technical support,” said John Dye, Scott Pallets, United Kingdom. “We use it to train new PDS users so they can better understand the interaction of all the materials used in pallet design with pallet performance.”

Illustrations and figures were all revamped and modernized as part of this new release, led by George Scharps, PDS Associate Engineer, and John McLeod, PDS Advisor to the President.

Special thanks to the Softwood Export Council for their partnership and support in this project. With the expanded languages, new international markets can now benefit from the User’s Guide as well.