Las Vegas, Nevada — To a lot of companies, choosing the right pallet can seem like a gamble. If you roll the dice with an expensive reusable pallet, you might lose it if you don’t have the right control technology, the right control process and/or the right pallet management partner. Alternately, you can choose to go with more inexpensive pallets which are less costly to lose, but which might not provide the same degree of performance. Another thing to consider is the optimization of reverse logistics. Too many providers sending trucks to retrieve reusables can compromise their value proposition. Such concerns can get in the way of going “all in” on reusables. Where do you start?

One of the things I like about this story is the methodical approach taken to deal with the legacy wood pallet exchange program in Norway. NLP initially focused it efforts on curbing wood pallet loss and theft. Then, after an effective control system was established, the stage was set to introduce an extraordinarily successful reusable plastic pallet program – one which has experienced only minimal loss.

This initiative has been aided by its 12-year relationship with Smart Retur (Smart Return), a reverse logistics service provider for wood pallets, containers and other reusable transport items recovered from retailers. And given Norway’s challenging geography and relatively small population, consolidating the reusable packaging returns from retailers is critical. Smart Retur and NLP collaborate with other European pallet poolers such as CHEP and LPR to return their pallets, thus reducing freight costs for everyone involved.

Norsk Lastbærer Pool AS (NLP) was established in June 2006 as a return system for wooden pallets in the Norwegian grocery industry. It is jointly owned between retail and supplier trade associations DLF and DMF. It services approximately 1,000 customer locations. In 2010 it began introducing RFID-enabled plastic pallets, and in 2012, plastic half pallets. In 2014, NLP launched its third (one-third) pallet, which measures 400×800 mm. It issues over 9 million plastic pallets annually to its rental customers.

Both companies have visited Shuert in Michigan to hone best practices in plastic pallet repair such as welding and patching.

In October 2013, NLP relocated its head office to a new operating facility at Langhus, near Oslo, where it installed modern washing machines for its reusable load carriers. One side of the facility is used by Smart Retur for the unloading, sorting, and repair of non-NLP retail delivery assets such as wood pallets, roll cages and other reusables. The two operations are kept separate. NLP, with its plastic pallets, is a much cleaner operation. Smart Retur, with wood pallets, generates significantly more dust and debris.

Smart Retur operates 11 warehouses in Norway, Sweden and Denmark, and services close to 3,000 customer points. Aside from providing retrieval and repair it also provides asset banking functions. For example, pallets recovered in one location can be retrieved from another Smart Retur location to reduce transportation costs. Excess assets such as wood pallets can also be sold to Smart Retur, or extra can be purchased if needed.

This September I had the opportunity to meet with Ragnar Strand, CEO at NLP, along with Tom Romanich, Business Manager and Søren Eriksen, CEO of Smart Retur (Smart Return) following Romanich’s presentation at PACK EXPO Las Vegas. The group felt there was value in sharing their experience with North American pallet users. The event also gave them an opportunity to better understand the U.S. market.

Prior to the formation of NLP, maintaining the condition and control of grocery pallets in Norway was problematic. Broken pallets were common – as was pallet theft. Some truck drivers were making the equivalent of $2,000 per week selling pallets on the black market, according to Romanich. He remarked that customers often didn’t recognize or appreciate the value of pallets. Millions of wood pallets are imported annually under load, with the cost of the pallet often incorporated into the cost of the merchandise. “People thought the pallets were free because they weren’t paying for them directly,” he said. 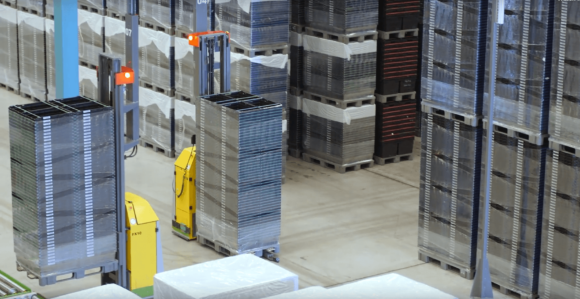 Companies were losing 30% of their pallets annually. “Norway’s a country where we imported like, almost 7 million pallets in total each year,” Romanich continued. “So you can imagine the cost of losing 30% of that just by drivers stealing.”

“At that time, no one knew where pallets were going,” said Eriksen. “It was like a stock market where you could buy pallets from brokers, transport agencies and individual truck drivers.” There was an active black market that was costing the industry millions of dollars annually.

The focus was on the problem first, and then the generation of solutions

Both Romanich and Eriksen stressed that the collective businesses began in response to the problem of pallet loss and excessive costs, rather than just trying to simply push out new products and services into the market. It was a good way to start, Eriksen reflected, saying it is better to build a house on a solid foundation rather than just building the house to find out there are a lot of challenges that have not been identified.

Aside from eliminating loss and theft, the other motivation, he added, was establishing an efficient system for returning all of the reusable transport items from the back of retail stores – one that involved consolidation rather than multiple trucks running partially empty. Norway, after all, is a very long country, one where a high truck fill rate is critical.

“We had to prove our excellence by handling the wooden pallets, first,” Romanich said of the NLP launch. “We started with a wood pallet, which was the entrance to the marketplace. Gain trust and the customer will respond accordingly (in investing in more expensive reusable assets.)” When the group was confident that pallet control was adequate, they introduced the more expensive but ultimately more cost-effective plastic pallet – thanks to its long life.

The system runs with an online reporting interface. The web solution provides the customer with complete visibility of sorting recovery results and the number of products deposited into their account. The various products can be delivered back to the customer or issued to a designated supplier or carrier.

For his part, Eriksen stressed the importance of building trust with customers based on an honest and accurate accounting for assets received from customers and added to their “bank” account, as a counterpoint to unethical practices he has seen in the marketplace. To further increase accuracy and customer confidence, the company is currently installing automated vision technology it plans to have in place during the first quarter of 2020.

In summary, NLP and Smart Retur have collaborated to deliver 40% cost savings to customers through the use of mutually coordinating returns, effective controls, ethical practices, and with durable reusable assets such as the NLP pallet. “We repair over 95% of all damages on these pallets and then put back in the loop again,” Romanich said, noting that the loss or scrap rate is just 0.02% per trip.  “And it’s proven because we have all the data for 10 years now through RFID tracking,” he concluded.