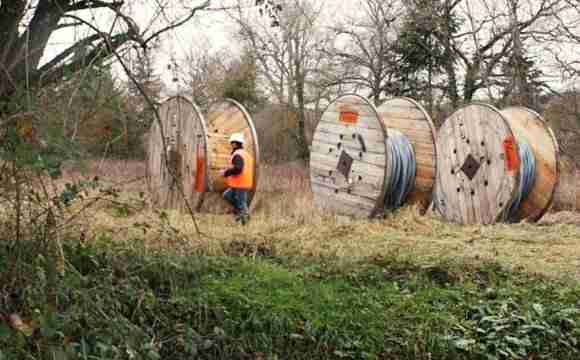 In connection with ffly4u and Sigfox , Nexans, a global player in the cable industry and energy transition, has confirmed its interest in connected reels and its confidence in French IoT provider ffly4u following its order for 10,000 boxes connected to the Sigfox 0G network.

Thanks to the monitoring and management service provided by ffly4u, a specialist in Industrial Internet of Objects (IIoT), distribution network operators (DSO) may precisely locate their drums (cable reels) and also know at any time the remaining cable length in order to check the progress of their work.

Nexans has used ffly4u technology to connect its drums via the Internet of Things (IoT) since 2017. Thanks to this service, Nexans customers have been able to make substantial savings generated by the geolocation of drums (fewer losses and lower logistical costs). Nexans had already benefitted from the  ffly4u solution through improved monitoring and management of its fleet of drums, resulting in reduced costs and improved customer satisfaction. The solution allows for the calculation of the residual length of cable per reel at the end of the day.

A first in Europe, the adoption of IoT by Nexans is an important step in the digitalization of the cable and fiber sector, and consequently that of public works.

Buoyed by the success of the program to date, Nexans has decided to extend this technology to its European fleet by ordering 10,000 additional boxes from ffly4u. This new enhanced version of the ffly4u service is made possible by the introduction into the box of a proprietary ffly4u technology called “Edge AI Low Power”.

Since 2016, ffly4u has developed B2B services in the field of industrial IoT around 5 vertical business lines (drums, skips, trailers, reusable packaging, aeronautics). With its proprietary solution embedded in the box, called “Edge AI Low Power” based on artificial intelligence and machine learning technologies, ffly4u believes that to date it is the only player in Europe to offer specific functionalities that meet the business needs of major players in the manufacturing, pharmaceutical, aeronautical, distribution, agricultural and food industries. For example, the duration of washing of a plastic container, the time of presence of an asset in a truck, the prediction of the maintenance needs of rotating machines, the identification of the takeoff/landing phases of an asset in an aircraft, invoicing for the use of rental site vehicles, etc. The Toulouse start-up has raised 3.2 million euros since its creation. Employing 15 people, it has delivered 20,000 connected boxes to date.

“The Connected Drums solution is based on a combination of ffly4u tags, Sigfox connectivity and a specialized Nexans platform accessible via the web in SaaS (Software As A Service) mode,” stated Olivier Pinto, Director Services and Solutions of Nexans. “This unique solution makes it possible to locate the drums precisely and in real-time in order to optimize their management, logistics and reduce their downtime while preventing cable loss and theft. The latest developments include, this is a first: real-time update of the residual lengths of cable on a reel allowing our customers to control their stocks as closely as possible and the progress of their projects. This new order will make it possible to deploy the solution on more than 15,000 drums worldwide at the end of 2020.”

“Today the industrial IoT sector suffers from a lack of value creation,” added Olivier Pagès CEO of ffly4u. “Its future, linked to massive deployments of several tens of thousands of industrial assets, involves the production and the restitution of data specific to the trades concerned.” For the cable industry, the “residual cable length” function provides considerable value.

“This is the path that ffly4u has chosen to take: using new proprietary technologies such as “Edge AI Low Power” for example, to increase the value produced,” he continued, “This new data produced by ffly4u not only improves the performance of industrial processes but also adds a line of revenue-service to the turnover of our traditionally manufacturing customers. This is the future of industrial IoT that we are building at ffly4u!”

With an industrial presence in 34 countries and commercial activities worldwide, Nexans employs nearly 26,000 people. In 2019, the group generated revenue of 6.7 billion euros.