You are here: Home / Announcements / New Softwood Duty Will Have Implications for Pallet Markets

Pallet kits are no longer exempt and will be subject to duty, resulting in more expensive Canadian pallet lumber for U.S. wood pallet manufacturers.

This week, U.S. Secretary of Commerce Wilbur Ross announced the preliminary determination in the countervailing duty (CVD) investigation of softwood lumber from Canada.

The Department of Commerce (DOC) preliminarily determined that exporters of softwood lumber from Canada received countervailable subsidies of 3.02 percent to 24.12 percent. In 2016, imports of softwood lumber from Canada were valued at an estimated $5.66 billion. As a result of the April determination, DOC will instruct U.S. Customs and Border Protection to collect cash deposits based on these preliminary rates. Also, since DOC determined that critical circumstances exist, certain companies will be subject to the retroactive collection of cash deposits.

The CVD law provides U.S. businesses and workers with an internationally accepted mechanism to seek relief from the injurious effects of unfairly subsidized imports into the United States.

The negative impact of the application of the softwood duty to the U.S. economy for 2017  is estimated to be in the range of $850 million net (after gains by domestic lumber producers) as well as the net loss of over 8,200 jobs.

While unassembled pallet kits were previously exempt from the Softwood Lumber Agreement under NAFTA, they now have been included in the determination. As a result of the application of duty, we are now seeing upward pressure on softwood lumber pricing, and ultimately on pallet prices.

At a website petitioning against the inclusion of pallet kits in the determination, some of the comments from U.S. lumber sales people and pallet producers alike are illustrative: 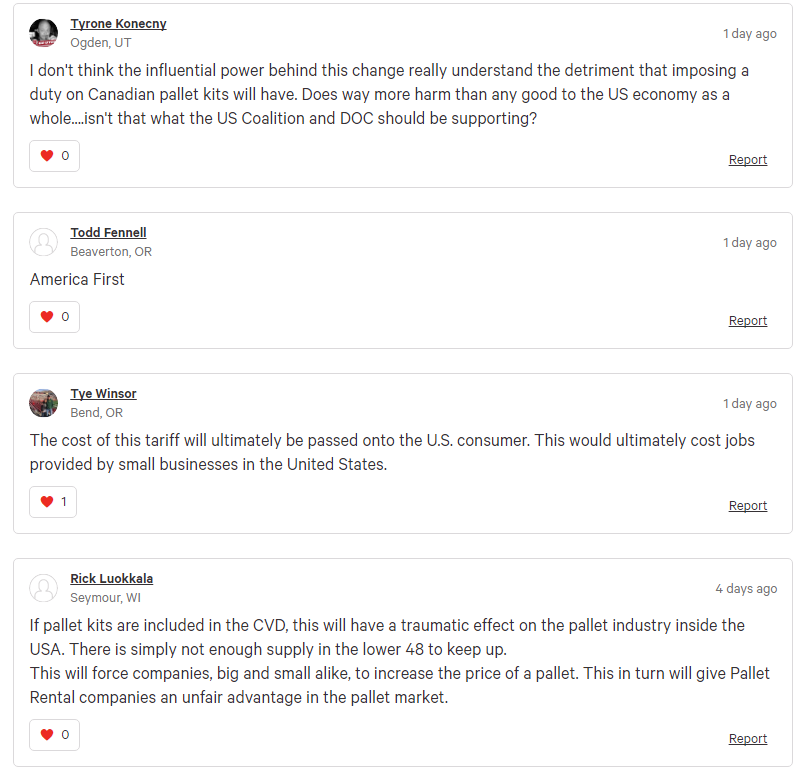 Other comments at the petition website echo a similar sentiment that the inclusion of Canadian pallet kits in the CVD determination will be harmful to the U.S. pallet industry and pallet buyers, making pallet rental or alternative material pallets more attractive in comparison. Once the anticipated preliminary antidumping duties are also included later in June, some estimates suggest that new wood pallet prices could rise as much as $2 each.

In this week’s edition of Industrial Reporting‘s Recycle Record, it is suggested that the duty and rising softwood prices will help stimulate the used (recycled) pallet market, which has been stagnant in various parts of the country. The recycled pallet market is also enjoying a bounce from the start of the produce growing season across the country. If duties persist, one can assume that used pallet inventories will also quickly tighten.