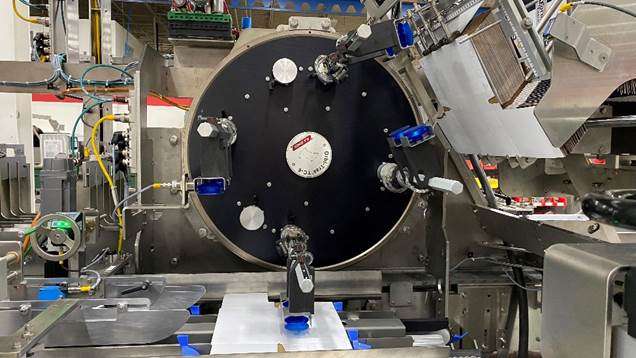 (Covington, KY – October 3, 2022) To meet increasing consumer demands, R.A Jones, a Coesia Company, has launched its new Orbi-Trak TC-6 speed-up kit for its Meridian XR machines, allowing beverage and food manufacturers to run a variety of canned product configurations at an unprecedented surge speed of 345 cartons per minute. This innovative carton feed technology surpasses the current standard speed of 300 cartons a minute, making R.A Jones’ Meridian XR machines the fastest in the industry. The Orbi-Track TC-6 is being debuted at PACK EXPO International 2022, where show attendees will be able to see the impressive packing speeds in real-time.

The new speed-up kit is an updated version of the Orbi-Trak, previously patented R.A Jones carton feed technology found on its Criterion machines. The speed-up kit is outfitted with six possible spindle carton pick and place locations rather than four. These two additional spindles expand the carton size range and speed capabilities of the machine, boosting overall production rates.

The main challenge with increasing carton speeds is that it can lead to carton jams and lowered efficiency rates causing production line downtime. With the company’s long history in packaging machinery and proven carton feed technology, R.A Jones re-engineered the spindle rotation so it was synchronized and would not interfere with the carton being picked up. By slowing down the spindle speed, the carton can better align with the speed of the airframe chains, allowing for a smoother handoff between the two devices. The matching speed is essential in preventing carton jams while still providing customers with improved reliability and increased efficiency.

Orbi-Trak TC-6 is now available as an upgrade to an existing multipacker machine and can be retrofitted to any Meridian XR already in service. The changeover from a standard carton feed to the new, faster carton feed is simple and cost-effective, typically completed in less than a week.  This addition has increased the speed at which customers can produce 4-, 6- and 8-pack configurations as well as expanded machine capabilities to package a wide range of product types, diameters and heights in virtually any package style and format.

“We had numerous customers express interest in running 4- and 6-packs faster than the industry standard of 300 cartons per minute,” said Robert Kalany, Senior Manager of Research and Development Engineering at R.A Jones. “Since carton feeds are an area where R.A Jones has a lot of experience, we adapted proven technology from our high-speed cartoning machinery and applied it to our beverage portfolio, resulting in equipment that is redefining industry packing speeds. With increased manufacturing speeds and minimized production downtime, our new packaging equipment is able to deliver greater reliability and profitably for our customers.”

Additionally, to reflect recent market shifts towards smaller and sleeker can sizes and diameters – as well as smaller pack sizes – R.A Jones enhanced its compact Meridian XR MPSC-210 machine. By upgrading the mid-range packaging solution with greater flexibility for single-tier can multi-packing, the MPSC-210 now expands its capacity to change can diameter within the same machine. These changes allow manufacturers to run greater can and carton size ranges 4-pack and 6-pack of standard and sleek cans, all the way up to a 24-pack at speeds of 210 packs per minute.

We need to reuse, not just recycle. These reusability metrics show how