You are here: Home / Featured Articles / Natural Disasters in Australia Pose Logistics Challenge: Loscam and Customers Work Together to Keep Businesses on Track

First came the Queensland floods. Then a cyclone tore through the northern part of the state adding to the chaos and damage. During the first testing months of 2011, Loscam, like many businesses, dealt with the challenges caused by floods and Cyclone Yasi.

When the floods first arrived in January, Irene Huigens, State Manager in Queensland, says Loscam’s priorities were firstly, the safety of all employees and their families, and then a focus on continuing to supply customers. 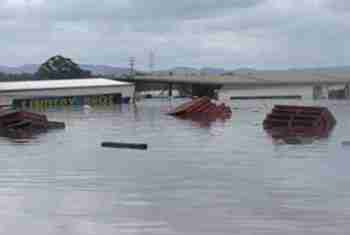 After securing as much equipment as possible at the threatened Rocklea depot, staff were sent home before flooding made travelling unsafe. An emergency staff meeting at a local hotel two days later enabled the Rocklea team to make contingency plans to continue supplying customers with pallets. Irene and her team began operating from home and via mobile phones and laptops until the floodwaters receded and they had access to the depot again.

“I don’t think anyone initially realised the flooding was going to be as bad. When the floods hit we had to quickly evacuate the Rocklea depot and we couldn’t get back in for four or five days. The floodwaters reached two to three metres high,” says Irene.

“But we had customers who were not affected by the flooding who still needed our pallets and we pretty much continued to service those customers. We’ve had a lot of positive feedback about how Loscam managed during this time.”