After trying other plastic pallets, soft drink producer values the durability of the Ultra Pallet® 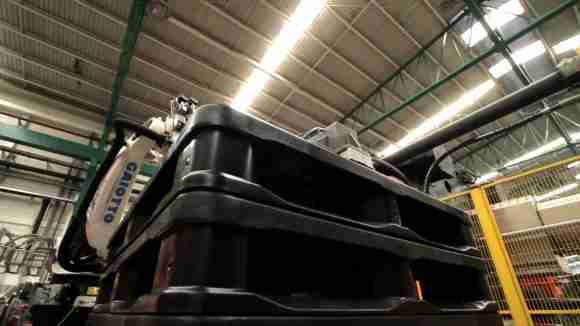 Replicating the successes of PTM outside Mexico has motivated the company to adapt to the specific requirements of Mexican customers in order to introduce the revolutionary Ultra Pallet® at home.

“The product that we were using at the time, suffered extensive impact damage due to forklifts under normal use. Pallets would separate into two parts, the top and the base, because they weren’t produced as a single, integral unit,” explained Roberto Quintero, Senior Engineer at Packaging Engineering in Coca-Cola FEMSA.

“Changing to the Ultra Pallet® was obviously the best choice because it fit our needs as an improved product with better impact performance. The foam plastic in its columns increased impact resistance and benefitted our operations.”

Impact resistance, durability, line efficiency and the lowest cost per trip in the industry are just some of the benefits that KOF Mexico received on changing to the Ultra Pallet®.

In addition, the reduction in operating costs was a determining factor for the Mexican company Jugos del Valle in deciding to close a contract with PTM for the delivery of 32,000 pallets.

This agreement implied that Jugos del Valle, a beverage company renowned for its products both nationally and internationally, would stop using wooden pallets, thereby reducing their process costs since the “40×48”Ultra Pallet® provided the characteristics needed for its operations.

The attributes of the Ultra Pallet® make it the best possible packaging option. It generates significant savings in manufacturing, storage and transportation, and also benefits the environment.