Lifdek offers on demand paper pallet manufacturing at point of use 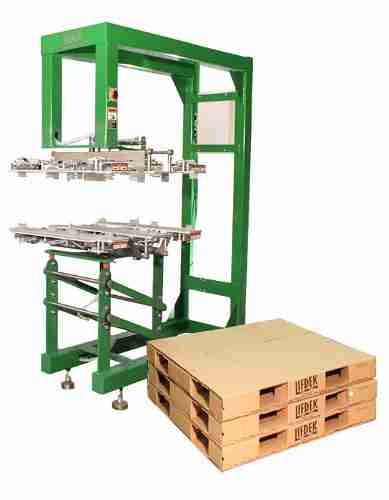 One of the negatives often cited about the use of pallets is the cost of moving empties. One solution to that problem is to assemble pallets at the point of use. Orlando, Florida based Lifdek Corporation, a developer of corrugated paper pallet technology, is now offering what it calls a revolutionary site-assembled corrugated pallet system.  Customers can use Lifdek pallet assembly machines on site to assemble pallets just in time.  Lifdek has started production of their pallet assembly machines with Ofab Inc., a leading contract equipment manufacturer in Ocala, Florida.

With respect to paper pallets, Lifdek states that cost and capacity issues were the remaining hurdles that needed to be overcome in order to be a viable alternative for high volume product manufacturers.  They company indicates it has solved these issues with a new corrugated pallet constructed from two flat blanks that easily fold together without the use of adhesives or staples and with a single low cost machine that can be used to assemble hundreds of different pallet sizes in under a minute.

“Customers are now capable of producing their own pallets onsite using two die cut blanks that they receive directly from a local corrugated board provider of their choice,: states Joseph Danko, President of Lifdek. “Lifdek’s assembly tables and machines allow these two blanks to be fully assembled in as little as thirty seconds to produce an inexpensive, strong and environmentally-friendly corrugated pallet.”

Lifdek pallets are designed to target the needs of the largest section of the pallet market, fast moving consumables.  Incoming pallet freight and pallet storage costs are reduced by nearly 90 percent because Lifdek pallets are received and stored flat.  Lifdek pallets are recycled by the end receiver with other old corrugated containers, generating recycling revenue, rather than accumulating and storing for pick up.  This one-way shipping approach eliminates the chance of cross contamination from prior use, providing substantial safety benefits for grocery and pharmaceutical applications.

Lifdek licenses the pallet technology to distributors and customers, which procure their blanks directly from their local corrugated board provider.  Licensees have access to numerous pallet sizes and designs, with new sizes available typically in two to three days.  The Lifdek pallet assembly machines are easy to operate and allow assembly speeds in as little as thirty seconds, roughly 200,000 pallets per year on one shift.  Use of the machines is made free with a $15K deposit, which is completely refundable based on pallet purchases.

“Japan and Korea have been the leaders in adopting corrugated pallets – based on older style designs, but we believe our new pallets and machine technology will change that.  The Lifdek pallet system is more than a pallet made from corrugated, it is a logistics cost savings solution,” says Danko.