After successfully developing the market and completing various trials with some of the country’s largest exporters, KraftPal has completed the deployment of its world-class pallet production technology and started production in the Middle East. 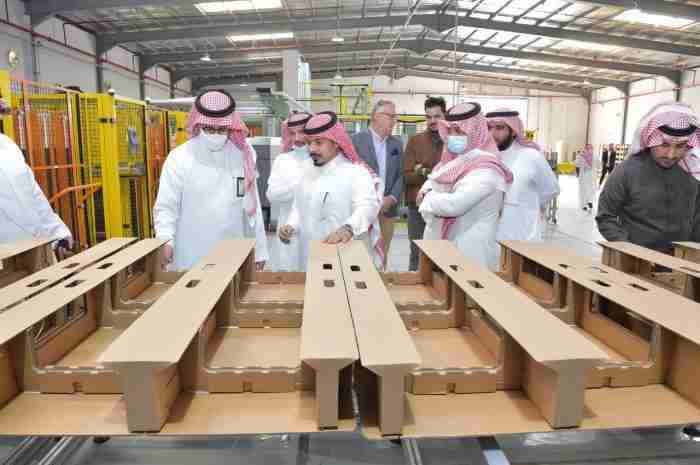 Kraftpal Saudia Arabia recently welcomed guests, including the Royal Commission, highest-ranking KraftPal officers, representatives from the exclusive licensing partner Etihad for Industry and future customers. Those representatives, as well as press, were given a tour of the facility. The walk-through showcased the production technology and products that are now finally available in the GCC region.

The new pallet production technology is capable of producing up to 1.5 million cardboard pallets per year. Guests were told that Kraftpal products reduce CO2 emissions in global supply chains and protect biodiversity. According to the company, the overall impact of KraftPal’s presence in the country and region is perfectly in line with the goals of the Saudi Green Initiative, which is overseeing the Kingdom’s transition towards net-zero using innovative technologies.

By becoming a strategic partner in the Vision 2030 program, KraftPal gained access to government funding programs that will facilitate KraftPal’s future expansion in the region.

“Having been born in a country where the availability of timber and therefore wooden pallets, has always been problematic, I feel privileged to be able to help businesses here gain access to the locally produced world’s best corrugated pallet,” stated Saeed Jumaan Al Zahrani, CEO of KraftPal Saudi Arabia.

“We have had successful trials with some of the country’s biggest exporters and that fuels me with excitement to set up more production facilities and onboard as many regional businesses as clients as possible. We honestly see the corrugated pallet as the pallet on which our Kingdom’s export and local deliveries will be built, while reducing carbon emissions.”

KraftPal has won several global packaging awards at WPO (World Packaging Organisation) and successfully introduced and sold its product for over eight years to several Fortune 500 companies and has patented both product portfolios and high-speed manufacturing processes (Industry 4.0). Mass production of KraftPal corrugated pallets is possible at rates that can far exceed any other corrugated or wooden pallet producer in the world.

With HME, an established mechanical engineering company recently acquired by KraftPal, the Company gained first-hand access to a technology partner capable to bring KraftPal’s existing production line development to the next level. The 5th generation of KraftPal’s production technology builds on years of extensive R&D efforts and experience gained through the development and ongoing operation of its predecessors. The new Palletonator 5.0 will be launched in Tampere, Finland as a part of the company’s developments in Scandinavia.

Without compromising the production line’s output, the engineering team reduced the machine footprint from 800 m2 to only 200 m2 by replacing continuous motion production with stop-and-go technology integrating 8 best-in-class robots while optimizing individual component lines and improving reliability due to smaller number of moving parts.