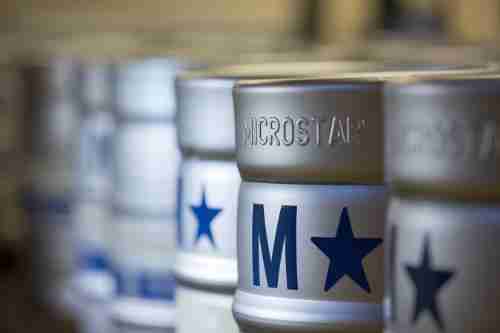 Avery Brewing and MicroStar Logistics have announced a multi-year extension of their on-going relationship. The keg management program offered by MicroStar provides the flexibility and efficiency required in the marketplace by leading brewers such as Avery Brewing.

“We see the MicroStar team as an extension of our brewery,” offers Adam Avery, Founder and CEO of Avery. “Their pooled-keg model, national scale and commitment to customer service are the perfect fit for Avery Brewing and we’re excited to continue our long-standing partnership well into the future.” Launched in 1993, Avery Brewing Company is known as the visionary brewer of Avery IPA, White Rascal Belgian-Style White Ale, The Maharaja Imperial IPA, Mephistopheles’ Stout and more than 20 other year-round and seasonal beers.

“Avery’s commitment to brewing world-class, category-defying ales and lagers and their adherence to the highest quality standards have led to their skyrocketing demand,” says Michael Hranicka, MicroStar’s President and CEO. “We’re proud to help support pioneering brewers like Avery as more and more consumers discover their award-winning beers.”

Avery Brewing has grown steadily since joining the MicroStar program in 2003, a trend predicted to continue as Avery makes prepartions to move into their $27 million, 96,000 square foot brewery in Boulder, Colorado. MicroStar’s ability to deliver the kegs needed without the worries that come with keg ownership will be a valuable asset as Avery manages their growth in the years ahead. MicroStar handles the supply-chain complexity associated with keg logistics, while also taking responsibility for repair and maintenance of its young, high-quality fleet of kegs. The choice of MicroStar versus owning their own kegs has allowed Avery Brewing to reduce their carbon footprint by over 65,000 kg of CO2e over the past 12 months alone, based on an analysis by Dr. John Heckman of PE International, the equivalent amount of CO2e emitted by burning 70,000 pounds of coal.

Founded in 1996, MicroStar Logistics, based in Greenwood Village, Colo., is the market-leading provider of keg management and logistics services to the U.S. craft beer industry. The company manages the largest independent network of kegs, approaching 2 million nationwide, and the corresponding logistical needs for approximately 200 craft brewery customers.