Robots are nothing new to the Heinz, Telford site – a large robot was installed three years ago palletising products from four separate production lines. The system has been successful and robots were the first consideration for the new five line requirement. The new Kawasaki system palletises ‘single serving’ sachets from four lines and plastics (bottled product) from a fifth line. 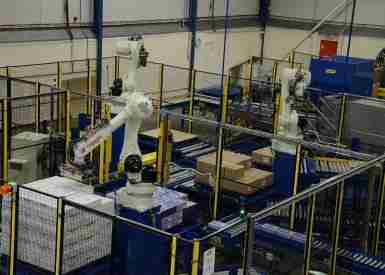 Over thirty concepts were considered initially, based on the offerings and revisions of potential suppliers, with the main constraint being the limited space availability. Kawasaki Robotics illustrated a flexible system, using its highly compact Kawasaki RD80 palletising robots, and was awarded the contract to design, engineer and integrate.

The overall system comprises 5 conveyor feeds from each of the filling machines taking product to a pick-up location in the robot palletising area. One of the three robots is dedicated to plastic containers and the other two take product from the four sachet lines.

Graham Boyle, Manufacturing Development Manager, Heinz Telford, explained, “ The process we automated runs three shifts a day five days a week and previously an operator’s time was dominated by the manual handling of boxes onto pallets at the end of the line. Very little operator time was available to mind the filling machine.

“As the filling machines were going to be running at the same speed with automation, as they were previously, the actual final outcome of performance was uncertain – introducing additional machinery arguably adds potential for breakdown. In fact soon after the system was commissioned we found that the filling machines’ performance increased. The system freed up the operator for each machine allowing them more time to sort materials and organise more effectively.” 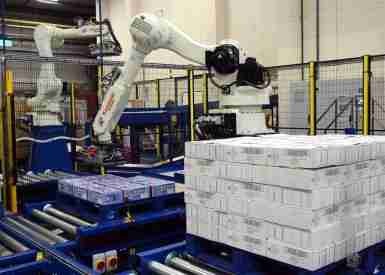 The Kawasaki RD80 robots are programmed to handle up to 13 variants of case with each robot able to palletise onto two pallet locations and with different product, if required, palletised on each pallet. Oriented cases of sachets arrive into the robot cell and, dependent on the programme, are picked up either one or two at a time and placed onto the pallet. For less stable cartons the robot grippers are designed to handle cardboard layer pads.

“Kawasaki provided invaluable expertise and best practice in the handling of cartons,” continued Graham Boyle, “in particular gripper design where we initially suggested a vacuum hose which we had used successfully on our existing system. Kawasaki recommended an onboard venturi system, for the vacuum gripper, driven by a simple compressed air source which is highly efficient, saves space and energy and doesn’t become blocked with cardboard dust.

“It was necessary to programme palletising patterns after installation, without being able to stop manufacturing, so we effectively had the added benefit of an extended training period with Kawasaki engineers on site.”

The robot cells are controlled using the Kawasaki’s Latest E Series controller which smoothly controls the robots 5 axes movement at high speed and uses its in-built programmable logic control (PLC) for integration of safety and cell peripheral equipment. Programmes are input manually when product changes on the filling machines and the whole cell integrates conveyor control and the robot cell through a hierarchical computer.

Graham Boyle, concluded, “Our aim for the system was to free up time for people to allow them to manage the machines more effectively – that has been achieved. The system works well, it looks good and has been very well accepted by operators.”