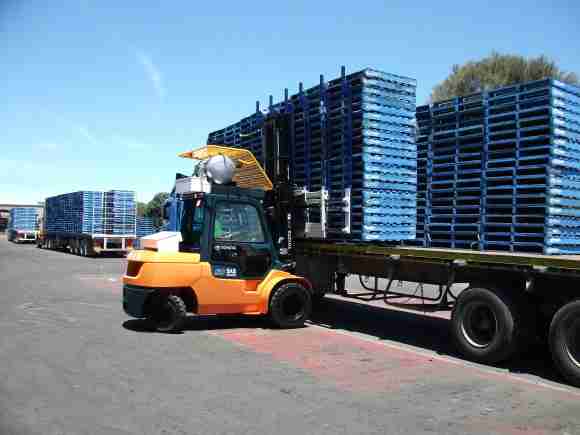 In a move aimed at helping truck drivers get back on the road more quickly, CHEP Australia plans to deploy triple-tine forklifts at its metro operations nationally in 2015.

Triple-tine forklifts were first introduced at CHEP’s Gillman Service Centre in South Australia in January 2014, with impressive results. Load times have reduced by an average of 10.5 minutes compared to loading with a double-tine forklift, according to Mike O’Flaherty, Regional Operations Manager.

“It has certainly decreased the wait time customers trucks spend in the yard which delivers cost benefits. I’ve been here [at Gillman Service Centre] for 23 years and this is the least congested I’ve ever seen the yard in this normally busy lead up to Christmas,” Mr O’Flaherty says.

CHEP says this is just the latest step in its continuous improvement process.  Other changes that have helped reduce wait times include fitting the forklift trucks with larger gas tanks, cutting filling time down to once per shift and saving up to 30 minutes per forklift. Another improvement is that CHEP Logistics trucks are now loaded overnight to reduce yard congestion during the day.

CHEP worked with the manufacturers on the forklift truck specs and on building an attachment that handles three stacks of pallets safely and is strong enough to cope with the 50 per cent increase in weight. The new five tonne fork truck is small enough to manoeuvre around a CHEP yard and has the flexibility to pick up one, two or three stacks of pallets/product at one time.

“The driver acceptance has been really good. Truck drivers have been commenting on the faster load times,” Mr OFlaherty says.

“Also, the forklift trucks are now air conditioned. In South Australia, it gets very hot in summer and air conditioning is a big plus for our staff.”

CHEP Operations Manager, Southern, Antony Hill says, “My expectation is that we see wait times reduced across the board with the flow on effect being improved efficiency for oprur customers and reduced transportation costs.”