Online grocery in Asia is developing at a rapid pace, with the market set to grow from its current value of US$99bn to US$295bn by 2023, according to the latest forecasts from international researcher IGD Asia. 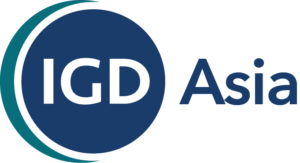 Highlights from the research include:

Shirley Zhu, Programme Director at IGD Asia, says: “The penetration, size and growth of online grocery varies greatly by country. South Korea, China and Japan will be the most established online grocery markets in terms of both market share and scale, while Singapore and Taiwan will also have well-developed online grocery channels by 2023, benefiting from existing infrastructure and retailer investment. Markets in Southeast Asia will see some of the fastest growth, but the market share of online grocery here will remain small. Markets such as India and Indonesia will also become increasingly important due to their scale.

“South Korea will remain Asia’s most advanced online grocery market, with its share growing to 14.2% by 2023, fuelled by the country’s increasing number of single-person households and the steady rise of mobile shopping. South Korea’s three biggest hypermarket chains, Emart, Lotte and Homeplus, have all developed online and mobile shopping applications, while major marketplace retailers Coupang, Gmarket and 11Street are also having an increasing impact on online grocery.

“However, despite South Korea maintaining a higher online grocery market share in 2023, China will strengthen its position as Asia’s largest online grocery market, with sales set to reach US$205bn. Ecommerce in China is aided by a rapidly growing middle class, high smartphone usage and strong internet connectivity. Alibaba and JD.com are making big investments in infrastructure, logistics and last-mile delivery in lower-tier cities, where demand is rising.

“Japan will also see online grocery sales strengthen further but, as with South Korea, growth will be relatively slow compared to other markets in the region. Retailers in Japan are seeking better ways to integrate their physical store networks with online operations. For example, 7-Eleven has made its smartphone order and delivery service, Net Convenience Store, available at more than 1,000 stores, and retailers are collaborating to strengthen their online proposition e.g. Seiyu (Walmart) and Rakuten, and Amazon and Life supermarket.

“Meanwhile, Singapore will firmly establish itself as the most advanced online grocery market in Southeast Asia. Competition here is fierce; retailers are building scale by attracting more customers, while also investing in technology for long-term growth. RedMart has been migrated onto the Lazada platform, as a move towards expanding online grocery to other countries in Southeast Asia, while FairPrice On is making use of robots and data analytics to improve its service.

“Despite market share of online grocery remaining less than 3% in all Southeast Asian markets (excluding Singapore), Indonesia and Thailand will see some of Asia’s most rapid growth over the next five years, albeit from a low base. Ecommerce is forecast to grow significantly in Indonesia as companies such as Alibaba and JD.com invest further. Thailand is also forecast to see a rapid growth in online grocery sales as key players such as Central Group, JD.com, Tesco Lotus and Villa Market build better infrastructure and more seamless apps for shoppers.

“From a very low base, online grocery sales in India are forecast to grow rapidly over the next five years due to a combination of retailer investment, better infrastructure, new payment solutions and a large population. Major players such as Amazon, Walmart and Alibaba continue to drive online growth here through strategic partnerships.

“Online is the fastest-growing channel in Taiwan’s grocery retail market and the trend is expected to continue. Ecommerce players such as PChome, Shopee and Momo have been improving the online shopping experience by offering generous return policies, rapid delivery and easier payment options.”

Shirley concludes: “Asia’s online grocery channel clearly provides huge opportunities for suppliers over the next few years, but there are a number of things they need to consider. The first is prioritising where to invest – the size and growth of each market varies significantly, so suppliers should be prepared to make choices and have a dedicated strategy for each country.

“Suppliers should also evaluate their products, packaging and supply chains in each market to make sure they are ready for the opportunity. As online retailers expand across the region and form more partnerships with bricks and mortar retailers, getting to know these companies will become the key to winning online. New innovations around mobile, delivery and payment are also emerging all the time, so suppliers should keep a very close eye on these rapid developments.”