Series production and delivery of 100,000 of the standardized reusable transport containers have started after the successful test phase. Entry is possible for other companies from industry and trade. 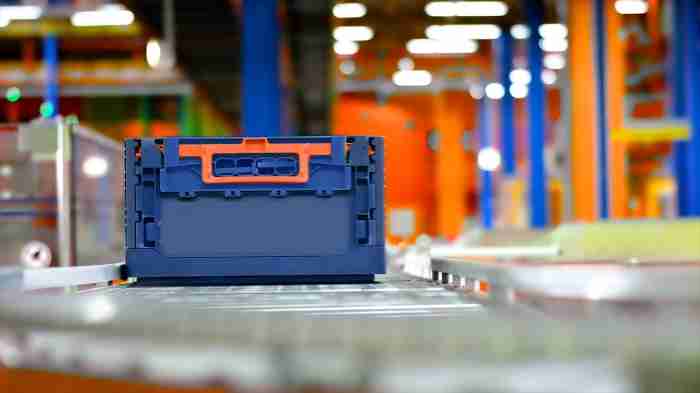 Cologne/Germany. The GS1 Smart-Box has cleared an important hurdle with the test run between industry and retail and is now ready for series production, which started a few days ago at Georg Utz GmbH. The first of the 100,000 blue series containers were delivered at the end of April. With a size of 600x400x211 mm, they form the basis for the later container family. These dimensions have been chosen to exploit the EUL loading heights of 1.20 m and 2.40 m, thus enabling optimum transport and storage utilization for fewer transports and, not least, lower CO2 emissions.

The distribution of the plastic reusable box, which is designed for the circular economy, is handled by the company IPP as a pooling partner. 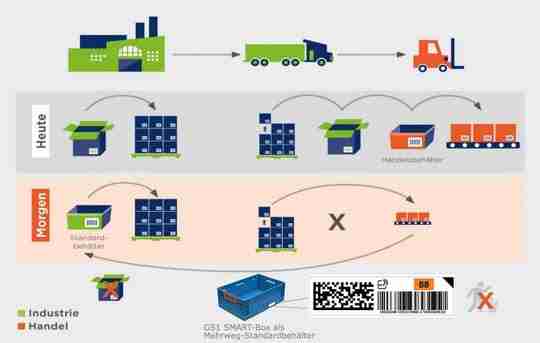 Go-live in the delivery network between industry and retail

In the test run, the gray-colored prototype, the so-called 0-series, was tested for performance in automated processes as well as smooth identification via applied GS1 barcodes, among other things. Industry and retail sent a total of 500 containers through their production and packaging processes. For example, they scrutinized the process in the distribution center.

Product manufacturers and retailers both participated in the test. On the industry side, Beiersdorf, Cosnova, Henkel, Kao, L’Oréal, and Procter & Gamble took part. From the retail side, dm-drogerie markt, Edeka, Müller and Rossmann participated. “Already when the test container was used, it was able to demonstrate many of its advantages for retail logistics, such as increased efficiency and more optimal environmental compatibility.

These include, for example, reduced material usage, as the GS1 Smart-Box can cover the entire logistics cycle from the supplier’s production plant to retail stores. “We, therefore, welcome all the more that the standardized reusable container is now being put into regular operation with series production,” explains Boris Haltof, Department Manager Small Order Picking, dm-drogerie markt.

Cross-border: GS1 calls on other companies from the consumer goods sector to participate

Initially, the GS1 Smart-Box will be used in the drugstore segment. Later, it will also accompany other consumer goods – such as clothing or confectionery – from production to the point of sale in a product-, environmentally- and process-friendly manner, thus enabling more automation in delivery networks.

The goal is to offer the container in an open pool to drive cross-company and later cross-country exchange. “The GS1 Smart-Box has its first ‘cross-border, international deployment’ in Austria in cooperation with GS1 Austria,” says Matthias Haubenreißer, Senior Manager Competence Center Supply Chain Management/ CC Reusable Transport Packaging at GS1 Germany. To structure open pooling based on a set of rules and GS1 standards, the project group is developing a new GS1 Recommended Practice. “Also in the current phase, companies are called and invited to participate and benefit from the GS1 Smart Box right now for the launch and commissioning of real logistics processes,” Haubenreißer explains.

Today, many products are delivered to central retail warehouses in cardboard boxes, repacked into internal reusable containers directly after goods receipt. Due to increasing automation and modern order picking, retailers rely on reusable containers, especially for small items. But supply chains also use them in internal cycles, for example, to support co-packing processes. Until now, each company has used its own – proprietary – container systems.

A circular economy between suppliers and central retail warehouses did not exist until today, reports GS1. “Companies from industry and trade have therefore agreed on common standards for the supply chain between production and trade central warehouse with the GS1 Smart-Box,” it states.

Industry and Trade Agree on Reusable Transport Boxes in Germany