You are here: Home / Announcements / Germany Wood Pallet and Packaging Statistics: Market Grew by 5.7% in 2016, Production of Over 100 Million Pallets for the First Time 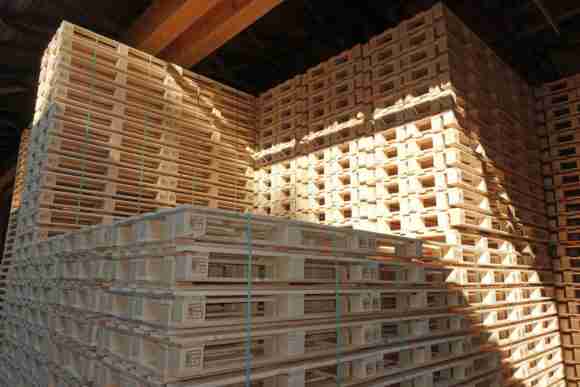 Bonn. Manufacturers of pallets, wood packagings and cable drums in Germany enjoyed stable sales and increased production volumes in 2016. Wood pallet output increased rose by 4.4%, while the manufacture of wooden crates fell by around 3.7%, Pallet manufacturing volume achieved an all-time high of more than 100 million units. “The good economic situation in Germany, an increasing volume of trading and a growing interest in sustainable packaging material are driving our manufacturers to a sustained volume of sales. At the same time, the prices remain under pressure despite rising production costs due to the enormous competition, “says Jan Kurth, Managing Director of the Federal Association of Wood Packaging, Pallets, Export Packaging (HPE).

An increasing number of customers in the logistics chain is now demanding a static calculation of the maximum load for the respective application, “explains Kurth. For this reason, in addition to the production volumes for euro and CP pallets, the total amount of special pallets made in Germany for special, individually planned cargo cases is growing. Demand for crates declined last year. Approximately 1.4 million cubic meters of wood were used as packaging units, a reduction of 3.7 percent compared to the previous year. However, this figure is purely based on the quantity of timber processed and does not take account of the increasing demand for logistical services in this segment.

The development of foreign trade is inconsistent with the primary load carrier in the wood packaging industry: Imports of flat pallets from wood are sinking, while exports are rising significantly. Imports of flat pallets in 2016 fell by around 0.9% to around 64 million units (2015: 64.6 million), while exports in 2016 increased by about 9.4% to about 31.3 million units. “Due to the continued high investment in manufacturing technology in Germany, the competitive position of our manufacturers has further improved,” says Kurth. Imports fell by 0.5 per cent across all wood pack- aging products, while exports rose by around 1.9 per cent.

Looking ahead to the year 2017, the German manufacturers of the HPE industry are still optimistic. “Despite global uncertainties, the German economy has started well into 2017. The moderate upturn in the last five years is expected to continue with a growth of 1.7% in the last quarter of 2016 compared with the same period last year and a prognosis of 1.8% for the first half of 2017 in the gross domestic product. Industrial production rose in many sectors, “says Kurth. Also, exports have continued to pick up in recent months. “According to many experts, the German economy will continue to grow in 2017. The export-oriented German economy is assuming that the positive impulses from countries outside the EU area continue to underscore a high worldwide demand for products, machines, and plants. As a result, our export-dependent German packaging industry can look positively into the future,” concludes Kurth.