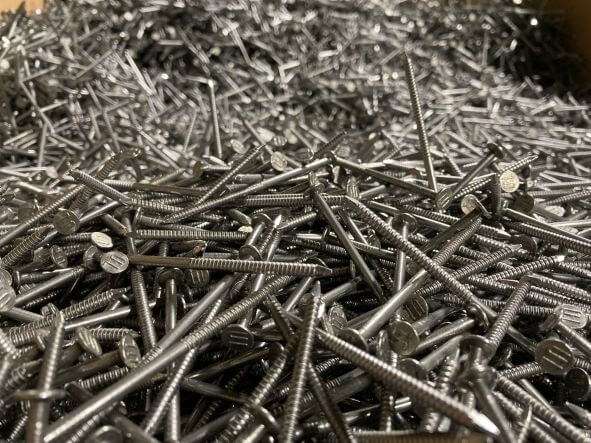 Bad Honnef, Germany – Pallet manufacturers are faced with an acute nail shortage, according to the Federal Association of Wooden Packaging, Pallets, Export Packaging (HPE), the German trade group. The first companies are already barely able to meet their demand for pallets and packaging. Production at some German pallet manufacturers could therefore come to a standstill in just a few weeks, reports HPE. This means that the supply chains in Germany are facing massive disruption.

Pallets are essentially made from lumber, pallet blocks, and nails. 78 nails are needed for a Euro pallet. According to the European suppliers in the HPE industry, around 90 percent of the loose nails required for pallets are made from Russian steel. As a result of the trade sanctions against Russia, no supplies can be ordered there until further notice – the industry association is of course trying to find solutions at all levels.

The pallets made in Germany are almost exclusively produced in (highly) automated production lines. The nails used require steel qualities that were previously available almost exclusively from Russia and which can therefore not be ordered from elsewhere so quickly – especially since there is little or no capacity available for short-term overseas deliveries, for example from the Far East. Since the German production machines cannot be converted to other nails, millions of pallets could soon be missing here. “If nails are missing, the affected companies are threatened with 100 percent short-time work overnight,” commented HPE Managing Director Marcus Kirschner. “The larger the resulting shortfalls, the more serious the effects on the movement of goods.”

Besides nail shortages, pallet imports are also paused from Russia, Belarus and Ukraine

In addition to the shortage of pallets from German production resulting from the nail shortage, there will also be no pallet imports from Russia, Belarus and the Ukraine for the time being. In 2021, a good 10 million pallets were imported from there. That was 14.5 percent of the total volume of German pallet imports. In addition, last year there were 9.55 million pallets from Poland and the Baltic States, whose manufacturers are heavily dependent on Russian wood imports. “From this alone, an import deficit of around 20 million pallets can be derived. In fact, the shortfall is likely to be significantly higher, since according to our information all European countries have the same supply problem with nails as Germany,” explains Kirschner.

German manufacturers of pallets, crates and cable drums are already experiencing bottlenecks with various types of wood because there are no imports from the Ukraine, Russia and Belarus. Depending on the wood range, up to 25 percent of German imports came from these countries last year – for example plywood, which is important for the HPE industry. In the case of sawn timber for pallets and packaging, the dependence of important Baltic suppliers of local companies on Russian and Belarusian softwood sawn timber imports is having a negative impact. More than 70 percent of the softwood lumber imported in the Baltic States in 2021 came from Russia and Belarus.

According to the Federal Statistical Office, more pallets were produced in Germany in 2021 than ever before. Pallet production increased by 8.0 percent to a good 119.5 million pieces. Supplemented by an import surplus of a good 39 million pallets, the domestic requirement last year was around 158 million pallets, which were used for the movement of goods in all areas of society to supply the population, industry and critical infrastructure. The quantity of boxes and cable drums produced rose by a good 15 percent each. HPE/FT

The Federal Association of Wooden Packaging, Pallets, Export Packaging (HPE) e.V. celebrated its 150th anniversary in 2019. It is a trade association with more than 430 mostly owner-managed companies from all areas of the wood packaging industry, which represent around 80% of the industry turnover of around 2.3 billion euros. The members of the HPE are suppliers of pallets, packaging materials, cable drums, crates and chip baskets made of wood as well as service providers in the areas of packaging, container stowage and logistics. The projected demand for wood in the industry – including small businesses with fewer than 20 employees – is around six million cubic meters and thus around 25% of the sawn timber produced in Germany.