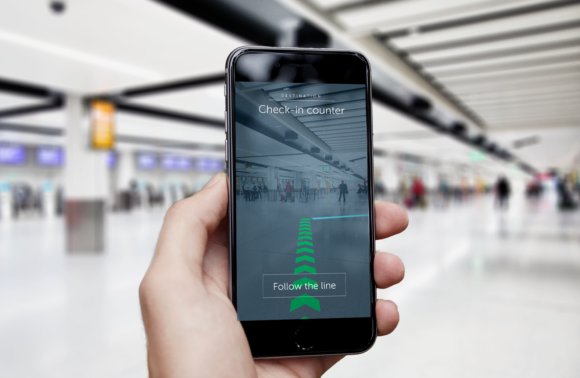 Hands up if you’ve ever found yourself not knowing where to go in a large terminal. I’m just having flashbacks to being lost in Tokyo Station last December. If it weren’t for some detailed instructions from Ms Ito at Japan Pallet Rental, I would probably still be looking for the right platform.

Normally I don’t stray too far from our core themes of reusable packaging, pallets and unit loads, but this release resonated.

As part of  Gatwick Aiport’s £2.5 billion transformation program, approximately 2000 beacons have been positioned over its two terminals to create an indoor navigation system that is much more reliable than GPS and that enables augmented reality wayfinding for passengers – a world first for an airport.

Weak or nonexistent satellite signals render road-based navigation systems – including Google or Apple maps – unreliable indoors, says Gatwick. As such, it deployed a beacon based positioning system to enable reliable ‘blue dot’ on indoor maps, which in time can be used within a range of mobile airport, airline or third party apps.

The beacon system also enables an augmented reality wayfinding tool – so passengers can be shown directions in the camera view of their mobile device – making it easier for passengers to locate check in areas, departure gates, baggage belts, etc.

The indoor navigation technology is now being integrated into some of the Gatwick apps, and the airport is also in discussion with airlines to enable the indoor positioning and wayfinding tools to also feature on their app services.

Retailers and other third parties may also use the beacon system to detect proximity and send relevant promotional messages if the passenger has opted to receive them.

This application could pay for itself in saved shoe leather alone!