Production of wood pallets is up substantially in Europe over the last decade, according to the congress of the European Federation of Wooden Pallet and Packaging Manufacturers (FEFPEB).

At FEFPEB’s 65th congress, entitled “Packaging and pallets in a competitive European Union” and held in Brussels, FEFPEB’s secretariat reported on industry statistics, which showed an encouraging increase in the number of pallets manufactured within its member countries. Approximately 401 million pallets were made during 2013, up from 371 million in 2010 and 339 million in 2006.

The update also showed significant price inflation on pallet timber, according to reports from Germany, Italy, the Netherlands, Sweden and the UK. The secretariat also discussed the decision to continue with the Europe-wide Packaging from Nature campaign to promote the benefits of using wood to manufacture pallets and packaging, as well as collaboration with global industry partners on a response to negative publicity created by plastics manufacturers.

The congress received further evidence that wood is the more environmentally friendly choice of material for pallets. A life cycle analysis which compared the impact of wooden and plastic pallets in monetary and percentage terms was presented by Jurgen Kemps of Dongen Pallets, a member of EPV, the organization representing Dutch manufacturers. It compared wooden and plastic pallets with identical dimensions and maximum dynamic and static load bearing capacities, finding that the total cost of a pallet made from wood is 25 percent less than theneconomic and environmental cost of an equivalent plastic pallet.

The sustainability and benefits of wooden pallets and packaging were also the subject of two Europe-themed presentations. Marc Michielsen, President of CEI-Bois and member of the FEFPEB executive, updated FEFPEB members on the European Woodworking Industry Manifesto, which was launched in September at a series of Wood Action Days at the European Parliament. Lauro Panella, member of the EC’s Cabinet of Ferdinando Nelli Feroci (Industrial Policy and Forest-based Industry) gave a presentation to the congress entitled: “The importance of the EU forest-based industry for the competitiveness of the EU”.

Further presentations were given by John Dye, President of the UK’s Timber Packaging and Pallet Confederation (TIMCON), who presented the organisation’s recently-launched best practice guide to drying wooden pallets; and Angelo Scaroni of Italy’s Scaroni srl, on his experiences and expectations of using dielectric heating for treating wooden pallets to ISPM 15 specifications.

“The FEFPEB congress is always a productive event, providing essential updates on the developments in the fast moving world of timber pallets and packaging, as well as important opportunities to network and discuss business with colleagues from across Europe,” stated Rob van Hoesel, FEFPEB President. This annual event highlights the willingness of our industry to collaborate and share information on vital issues, a fact that has had a large role to play in the ongoing success of the sector, illustrated by growing figures for European manufacturing of timber pallets and packaging.”

The congress was preceded by an informal dinner in Brussels. The 66th FEFPEB Congress will take place in Cork, Ireland, on 28th to 30th October, 2015. 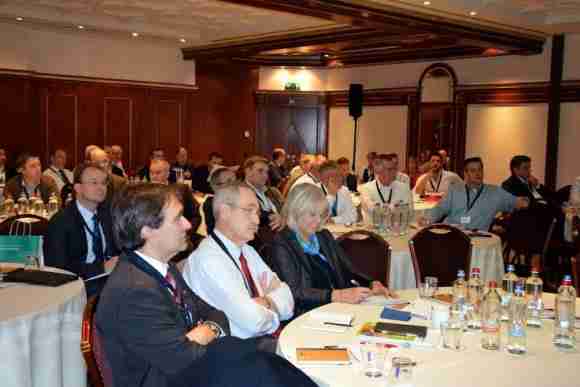