Fatal fork lift truck accidents in the UK have fallen by more than two thirds since the introduction of the Fork Lift Truck Association’s National Fork Lift Safety Week campaign, according to new statistics from the Health & Safety Executive. 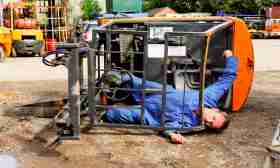 Provisional workplace accident figures show just five British workers were killed by fork lift trucks during 2009/10; down from a peak of 16 as recently as 2006/7.

The FLTA highlighted the statistics while unveiling the training-centred theme More Skills, Less Spills for this year’s Safety Week.

The data confirms a third consecutive improvement in UK’s fork lift truck safety record – for both fatal and non-fatal accidents – since the Association introduced its annual safety campaign in 2008.

Fatal, major and three-day injuries have all now reached record lows – with overall accident totals having fallen by 45%.

Major injuries, including amputations, long bone fractures and unconsciousness, fell below 400 for the first time since records were published.

The sustained improvement in fork lift truck safety far outstrips a slight fall in workplace transport accidents overall, suggesting there is more than the economic downturn behind the trend. FLTA Chief executive David Ellison says: “Every serious fork lift truck accident is a tragedy, and it goes without saying that five fatalities is five too many.

“Nonetheless, a further year’s improvement in the fork lift truck accident record can only be positive news. It’s further proof that a little extra care can make a huge difference. For instance, many trucks are still operated by people who are not adequately trained – putting life, limb and property at serious risk. For that reason, this year’s Safety Week will have a training theme – summarised in the slogan more skills, less spills.

“Fork lift trucks remain statistically the most dangerous type of workplace transport. Even after the latest improvements, there were still 369 serious accidents – that’s a worker hospitalised with a major, potentially life-changing injury, every single day of the year.

“We will therefore redouble our efforts to help and encourage companies to safeguard fork lift truck operators, their colleagues, and the general public.”