Tyson Steffens looks at the dynamics of the industrial hardwood market, which have resulted in continued pressure on the pricing of wood pallets and other wood products.

In the last 15 years, the cost of industrial hardwoods has become increasingly more expensive and volatile.  For almost a decade prior to 2003, hardwood cant pricing, the main feedstock to make industrial wood products and wood pallets, remained relatively steady at about $320 MBF (thousand board feet) in the heart of hardwood country.  In 2003, there was a significant jump in pricing which signaled the beginning of a continued rise in price and volatility.  Why has this occurred and what is reasonable to expect moving forward?

Where does industrial hardwood come from and what has driven price fluctuations?

The origin of industrial hardwoods (and any industrial lumber) is pivotal in understanding what drives the pricing and how.  Almost all trees that are cut down, other than those small or defective logs which are destined to be ground for paper pulp, are cut for grade material.  Grade material is the choicest portions of the log, cut to various board sizes and kiln dried for structural and appearance applications such as building studs, furniture, trim, veneer, and some flooring etc.  The remainder of the log, notably the center portion called a cant, is discarded from the process and this downfall enters the industrial wood market.  The key point to understand here is that industrial wood is a by-product of, and depends upon the production level of, the grade lumber market.

This being the case, the traditional drivers of industrial hardwood pricing were largely a balance between the demand for grade lumber and the ability to log, the latter predominately driven by weather.  If housing is booming, furniture and trim are needed.  Grade lumber demand increases which produces more industrial downfall acting to oversupply and push pricing down.  If you have a particularly wet stretch of weather that prohibits logging crews from accessing timberland this decreases the supply of logs acting to undersupply and push prices up.  In the recent past when the American economy was heating up, the housing market was too, so there was a nice balance that tended to keep pricing steady, irritated only occasionally by weather events.

A number of factors changed that began to undo this balance.   While some proceeded to increase the price at which the balancing act could once again find stasis, others introduced volatility as well. 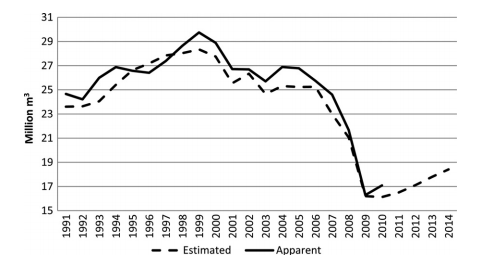 Source: US HARDWOOD LUMBER CONSUMPTION AND INTERNATIONAL TRADE FROM 1991 TO 2014

With fewer logs being harvested for high dollar grade hardwoods, industrial hardwoods appear to make their first shift to a new balancing point moving from $320/MSF to $370/MSF throughout 2003.  As the economy fell into the great recession, and the demand for grade material plummeted, industrial hardwoods ascended in price once again to $420/MSF settling at a new balancing point of $410/MSF.

The following graph shows the consumption of hardwood by major use categories.  As you can see, the offshoring of furniture production, which drove US consumption down, also inverted the relationship between grade lumber and the downfall product of industrial grade hardwoods.  This change in relationship created a severe strain on the availability of industrial feedstocks helping to create the new post-recession price points. 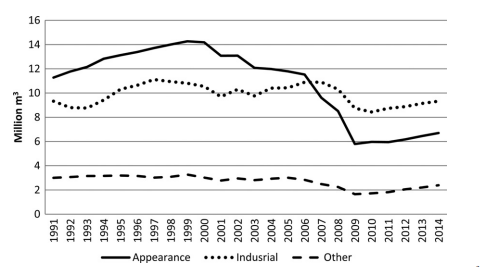 Source: US HARDWOOD LUMBER CONSUMPTION AND INTERNATIONAL TRADE FROM 1991 TO 2014

So how did industrial hardwoods push beyond $500?  China.

As the industrial hardwood market was settling into what seemed like another ‘new normal’ in mid-2010, new problems were on the way.  Railroads were increasing rail tie purchases, horizontal drilling and ‘fracking’ were gaining traction, but the big driver was the exportation of hardwood to China.

From 2005 to 2010 the railroad industry purchased rail ties for maintenance projects at a very consistent rate.  From 2010 to 2016 that number steadily increased 47% in just 6 years.  A rail tie is essentially a very larger cant. So, every rail tie purchased is a cant that won’t be available to pallet mills.  Currently, there have been cross-tie buys at $750/MBF.

The Eagle Ford shale formation saw early drilling in 2008 but the granting of permits skyrocketed in 2010, followed shortly by the Marcellus formation in OH/PA and numerous other gas/oil reserves that these new techniques unlocked.  The drilling required the use of crane mats and rig mats…both are variations of timber roads/platforms required for equipment to reach drill sites while staying within environmental regulations.  Being such a small portion of the drilling cost, drillers would specify a quantity and a date, and award business based only these two criteria.  They literally did not care what the price was.  One example of this approach produced crane mats being purchased at $800/MBF when hardwood cants were running $400/MBF.  Just like a rail tie, the timbers used to create these mats are essentially oversized cants.  Every timber used for matting is literally a cant removed from the market for the pallet manufacturers.  These activities, which would spot buy larger quantities of lumber at prices outside the purchasing limits of the pallet industry, caused (and still do) large sudden price spikes and availability problems.

However, these appear to be sideline events to China’s recent appetite for US hardwood logs.  As you can see in the following graph, as US hardwood exports have increased, the main driver is the sharp increase by China. 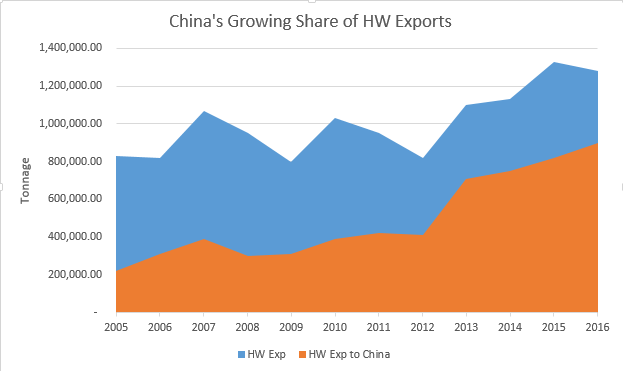 Here is a detail that often slips by.  Most of this exported hardwood had always been grade boards.  The logs were cut here.  That meant that the cant, the falloff for the industrial sector, stayed in the US while the grade lumber went overseas.  So, exports traditionally would help create downfall for the industrial users.  However, as China’s volume picked up they began buying the whole log prior to its being sawn.  So instead of exports helping the industrial market, every export to China was hurting the industrial market.  Then China drastically increased their purchases compounding the problem.

Here is a chart of industrial hardwood cants for the Mid-Atlantic region to reference as all of these factors are considered.

Is there any end in sight?

At this time, nobody can predict with any real level of confidence what will happen because there are simply too many variables in play.  Will China keep buying hardwood at the current or possibly increased rates?  Might the US limit hardwood exports?  Will our manufacturing economy experience another surge increasing industrial hardwood needs further?  At what price point will it make sense for a logger to fell trees driven by industrial use rather than grade lumber demand?

One thing is for sure…as the price of industrial hardwoods continues to climb (and know that soft wood is moving too!) it is increasingly important that you have the ability to rethink the way you design, use, and source industrial lumber products.  The only thing everyone seems fairly sure of is that more change is coming and at faster speeds than we’ve experienced in the past.

You’ll be best prepared if you think of your pallet, dunnage, and crating purchases as industrial lumber purchases and evaluate them as such.  Be ready to pivot.  If you aren’t ready to pivot on design, material, and how you use these products, get ready to.  If your team doesn’t have the needed skills, experience or time to do so…find a partner that can help you.

If you would like to contact Tyson directly to discuss the industrial hardwood market from either the buyer or supplier perspective feel free to contact him directly at tysteffens1@gmail.com.
For more information about the innovative pallet programs and services offered by The Pallet Alliance, visit www.tpai.com or phone at 919.442.1400.