Valencia, November, 2012 – The European pallet and packaging industry is well organized and prepared to deal with the challenges set by a possible extension of European ISPM 15 regulations, delegates at the annual FEFPEB congress heard. 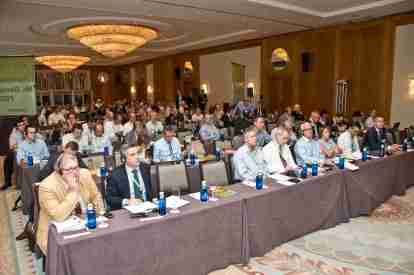 The congress, which was organised by FEDEMCO and FAPROMA, the two associations representing the Spanish timber packaging industry, and held in Valencia on October 3-5, heard updates on the main issues affecting the European business, including a strong focus on ISPM 15.

During the morning session, Roman Vagner, plant health administrator from the European Commission, Brussels, updated the congress on developments in plant health regulations that would impact on the sector. These include the extension of the current regime, collaboration with the timber packaging sector and the development of dielectric heating, which is a proposed new method of treating wood for ISPM 15 compliance and likely to be approved during 2013.

There were also updates on the North American markets, as well as an overview of the recent impact study on ISPM 15 extension in Europe, to which FEFPEB contributed on behalf of its 14 member countries, pallet pools and its associated members.

“The ongoing dialogue between the FEFPEB ISPM 15 Taskforce and the European Commission is of critical importance. We continue to work with plant health experts on ISPM 15 developments globally, and are particularly engaged with the process of reviewing these regulations within the European Union.

“The impact study highlights the key issues such as shortfall in heat treatment capacity in some countries and the critical importance that the regulations apply to pallet repairs. As a result of close cooperation with FEFPEB the industry can be confident that the European Commission has all the information necessary to make an informed decision. This will ensure that timber packaging products continue to facilitate world trade on the basis of their superior performance, price and environmental credentials compared to alternative materials.”

At the congress, presentations were made on developments in logistics and distribution. Charles Kirby of IDOM Consulting in Spain gave an overview of worldwide trends, which include the impact on logistics planning of increasing global trade flows; service integration; as well as national security; standardization and the role of IT in meeting the demands of the changing supply chain.

Meanwhile Francisco Borrás, deputy director general of leading Spanish fruit exporter Anecoop, gave delegates an insight into the role lightweight wooden packaging plays in the Spanish fresh produce sector, which exports up to 11.5 million tonnes of fruit and vegetables every year, a significant proportion of which is packaged with wood.

A presentation by general manager of forest certification association PEFC in Spain, Marta Salvador highlighted the growing importance of sustainable forest management and chain of custody certification to buyers of timber, particularly large purchasers such as supermarkets. The EU Timber Regulation (EUTR) banning timber from illegal sources comes into force on March 1.

The congress concluded with presentations from FEFPEB on its current work, including lobbying on behalf of the European industry to the European Commission, involvement in policy formation and its Packaging from Nature promotional campaign, which since being launched at the FEFPEB congress last year has been extended to include the same logo, website and key messages in seven languages.

Announcing the members of FEFPEB’s Executive Committee, current President Gil Covey said he would be stepping down at Interpal 8 in Bordeaux, France, in October 2013, and that Rob van Hoesel from The Netherlands would succeed him in the role. Mr Covey added that the transition would be smooth and that he would continue to be involved in FEFPEB.

“This year’s FEFPEB Congress was a huge success, with an attendance of around 200 delegates,” said Mr Covey. “It demonstrates clearly how organised and coordinated our industry is, standing us in excellent stead to meet challenges and maintain wood as the material of choice for European packaging and pallets into the future.”