You are here: Home / Announcements / Production of EPAL pallets at a high level in 2019 again 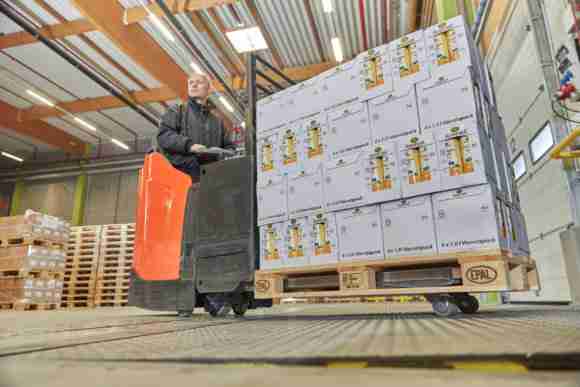 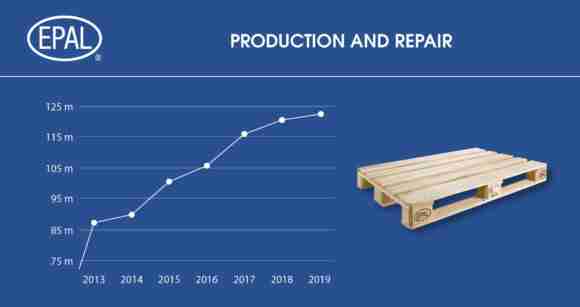 “Despite the economic slowdown in Europe, the need and demand for EPAL pallets grew in 2019,” commented Robert Holliger, President of EPAL.

Currently there are more than 600 million EPAL pallets and 20 million EPAL Box pallets available to the global logistics industry and used by shipping agents, transport companies and large retailers. For many years the pool in Europe has been growing continuously. Due to the very high level of new production, the pool is able to serve the increasing quality expectations of the supply chain. As a result, quality classification levels A and B are also available in greater numbers. The EPAL system’s foundations comprise: independent quality assurance, international trademark protection, acceptance by all market participants, environmental responsibility and sustainability. The EPAL Box pallet also continues to have widespread acceptance in the automotive industry’s supply chain. 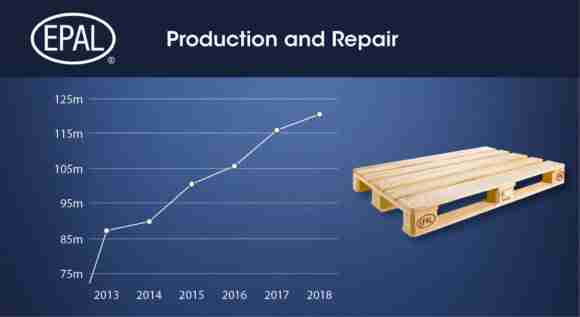 Christian Kühnhold, EPAL’s CEO commented, “Thanks to the hard work of all licensees, but also due to the solid strong demand in the FMCG sector, in general industry markets and the automotive supply industry, EPAL also had a correspondingly positive development. On this basis, we, EPAL want to work hard in all relevant areas and provide the tools, so that the open exchange pool develops even further. This concerns the further development of existing load carriers, e.g. intelligent EPAL pallets or the market launch of new load carriers, such as the independently inspected EPAL CP pallets.”

For nearly thirty years EPAL Euro pallets have been the heart of logistics, they move flows of goods globally and are essential for the safety and smooth operation especially in automated high-bay storage. The huge number of A and B quality pallets from high-bay storage ensures that the open Euro pallet pool is the most extensive exchange pool of all. Users of EPAL Euro pallets take advantage of the benefits of the open pool, the EPAL system, whose cornerstone is the continuous availability and global exchangeability, cost transparency and contractual independence.

EPAL’s DNA, the essence of which is independent quality assurance as well as legal action against counterfeit pallets, goes hand in hand with the EPAL system.

Thanks to the reusability of EPAL pallets in the open pool, logistics costs and CO2 emissions can be reduced. EPAL pallets can be repaired with lower materials and energy costs and at the end of their life cycle, are completely recyclable.

Düsseldorf, January 19, 2018 – The European Pallet Association e.V. (EPAL) has announced a record result for 2017 of 115.8 million EPAL quality load carriers produced and repaired. Compared to the previous year, this is an increase of nearly 10%. In 2017, production figures alone rose by 9.7% to 88.3 million EPAL pallets, while repair figures climbed to 27.5 million; a solid increase of 10% compared to the previous year. 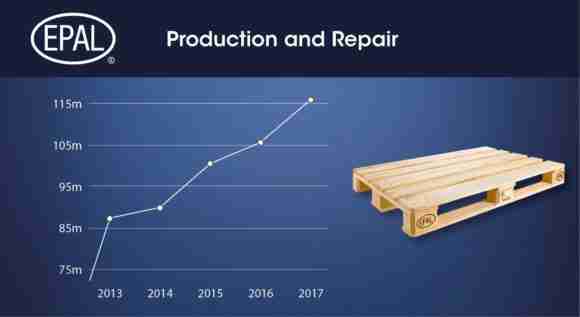 As for pallets in other parts of the world, the EPAL Euro pallet is considered an early indicator for the economies of the markets it serves. The rising economic barometer in economically strong countries over the past few years has driven the demand for EPAL Euro pallets to a peak last year. EPAL producers and repairers have been working at full capacity for months. The persistently high demand for sawn timber led to a shortage of the raw material in 2017 and a huge price rise in sawn timber for pallets, increasing cost pressure for EPAL pallet producers.

“The current demand peaks can be cushioned with sound planning and a long-term partnership between EPAL pallet producers, suppliers, and customers,” stated Martin Leibrandt, CEO of EPAL. “Trade and industry partners who planned at an early stage and who value long-term supplier relationships are being well provided for. The outstanding 2017 figures are the result of the joint work of all EPAL National Committees and licensees, and a sign that trade and industry are increasingly relying on independently tested quality and safety, which pay off in the long term.”

The EPAL system with its three pillars of consistent international standardization, independent quality assurance, and the protection and prosecuting of trademark rights infringements, guarantee users high-quality load carriers for efficient global logistics. EPAL Euro pallets can be reused several times and can be repaired cost-effectively, so they also conserve natural resources.

The European Pallet Association ensures a smooth flow of goods in the logistics world with over 450 million EPAL Euro pallets and 20 million box pallets in the world’s biggest open exchange pool. Founded in 1991 as the umbrella association of licensed producers and repairers of EPAL load carriers, EPAL is globally responsible for their consistent quality. EPAL pallets are produced from sustainably grown, CO2-neutral wood. They can be repaired and recycled, and reduce transport distances thanks to their high level of availability. As a registered association, EPAL does not pursue any commercial interests and makes all its decisions in the interests of its industry, trade and logistics partners. EPAL is represented in more than thirty countries by fourteen National Committees which have committed themselves to implementing the EPAL objectives.