You are here: Home / Featured Articles / Decline in Polystyrene Fish Box Numbers Could Be Due to Disposal Issues

The number of expanded polystyrene (EPS) boxes, traditionally used in the seafood industry to carry fresh fish through the supply chain, has been in a steady decline over recent years, according to PPS East, a supplier of reusable plastic fish packaging. PPS believes that various factors could account for this, such as improvements made to chilled transport vehicles reducing the need for box insulation, high polystyrene box prices and the ready availability of alternative competitive packaging. 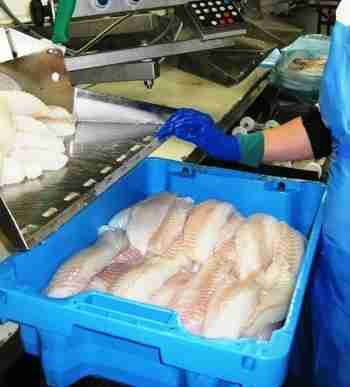 PPS also offers comments from the Sea Fish Industry Authority: “For many seafood processors or wholesale markets, the disposal of used polystyrene fish boxes can be expensive and a difficult problem”, noting there is a legal requirement for recycling packaging waste under the Producer Responsibility Obligations (Packaging Waste) Regulations.

On the back of the decline of polystyrene fish box numbers, PPS East reports that an alternative packaging solution has seen a steep incline in demand.

Grimsby based PPS East has seen a large increase in the use of their products, especially their fillet trays. They have reported a year on year growth of 100,000 uses of their 15kg fillet trays. By the end of 2013 they are predicted to reach 500,000 rentals just for this sized box.

Apart from increasing annually its pools of 6kg crates, 10kg fillet trays, 25kg salmon boxes, bulk bins and plastic pallets, PPS East will shortly launch some new smaller sized boxes that could increase competition and move the industry even further away from polystyrene.

A spokesperson for PPS East commented, “The fact that these reusable fish boxes are paid for ‘per use’, means these products are available to any fish supplier at a lower cost than polystyrene or Styrofoam boxes. There’s also the added benefit of zero waste packaging – unlike polystyrene boxes – as they are collected after use, hygienically washed and then reused.

PPS East boasts BRC accredited box washing facilities that clean and sterilise plastic boxes, crates and pallets, which are then subject to swab testing prior to being palletised and shrink-wrapped after every use. These are then returned into the loop and sent to fresh fish suppliers around Europe for product to be packed and distributed in them.

We manage all equipment pools and customers do not have to spend time organising box collections and cleaning, it is all part of the PPS East service”.
For more information about changing your packaging to reusable fish boxes, visit www.ppsequipment.co.uk.